Years in the making: Locals blast through barriers 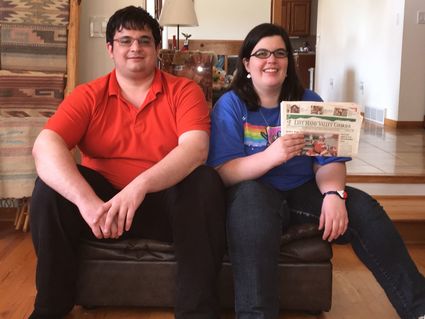 Courtesy Photo Casey (left) and Meg Grothus have come a long way since the Courier last wrote an article about them. Meg is working on a smartphone app and Casey is helping other autistic kids through an internship program.

Meg and Casey Grothus are no strangers to the Left Hand Valley Courier, nor the town of Niwot.

The brother and sister team have come a long way since they were featured in an article almost a decade ago about their internship with Google involving their idea for SketchUp, a 3D modeling program.

The program is geared towards helping those who suffer from autism get internships, and after some typical fast moves from the tech industry, SketchUp is now owned by a company named Trimble, which has employed Casey full-time.

Eight years ago, Casey and Meg were just finishing their high school careers. Now they are both successful in their own rights.

Along with Casey’s job at Trimble working with their customers, he acts as a mentor for others with disabilities.

“Basically what I do is work with customer support,” Casey said. “When I’m not doing that, I work on community outreach, staying plugged in to what’s happening. It can be tricky. Some days it’s really easy, some days it’s a lot harder …

“It’s more than just the autism, but it’s really inspiring if you think about it, how much we’ve had to overcome and how we’ve done it. We’re not exactly what we’d say is ‘normal,’ but we do our best. That’s all we can hope for.”

Parents Heidi and Mike said that they’ve always taught their children not to settle.

“I was pretty strict raising them in terms of having good character,” Heidi said. “I always told them that there’s people in the world who are just takers, they just take. I told (Meg and Casey) that they have to be givers, be working or volunteering. Just be a good person, that was something we really drove home. I’m so happy that they are driven and have high expectations for themselves.”

With Casey, Heidi said that his work now reflects reflects his childhood.

“He really felt grateful for the help he got along the way,” Heidi said. “So he’s so excited to be able to help somebody else in the same way. If they hadn’t been in that program, they’d be in a very different situation.

“To be in your 20’s and have an opportunity to impact someone else’s life like that is pretty amazing. He takes it very seriously. Nothing is too small… he meets them where they are in their journey. I’m proud of that.”

Casey and Meg were diagnosed with autism at the ages of five and four, respectively. Mike and Heidi didn’t notice anything until they started school and were falling behind.

“Life was hard for them, but they are very driven, they don’t give up and they don’t take no for an answer,” Heidi said. “If something isn’t going the way they want, they take responsibility and make a change. Whatever it takes.

“Just having that strong character helps them a lot. And they’re nice, they’re very kind, loyal, trustworthy, honest … I think people value that … And they’re humble, very humble. They’re gifted with the intelligence to develop compensation strategies where they do struggle. They’re great kids, I couldn’t be more proud of them.”

Autism affects every individual differently, which was something the family had to learn.

“It’s life-changing, every minute of every day is trying to help your kids,” Heidi said. “You meet them wherever they’re capable of. That’s what you do as a parent, whatever it takes. We were very lucky to have the time to spend.”

All four said that each day is a test, a chance to either make it or break it.

Through Project Spectrum, Casey and Meg have had opportunities, but that doesn’t mean things have been easy.

“I think some times have been more difficult than others,” Casey said. “But I’d say it’s been quite successful. Project Spectrum has always been helpful and given me a skill set. It’s made me feel valued.”

To be able to help others on their journey has made the experience special for Casey.

Heidi added that Project Spectrum was a life-changing experience for her children.

“The longevity is a testament to the personal sacrifice and commitment of the SketchUp people involved,” Heidi said. “It is making a difference in people’s lives, not just talking about it. The long term relationships affirm value and strengths. The classes build skills. And the internships build resumes.

Barry Janzen, who works with SketchUp and Casey, said that the two have been doing amazing work.

“One of the things that’s impressed me about these two is that they’ve stuck with the path,” Janzen said. “Some things don’t come as easy and don’t come as quick as they would for a nuero-typical person. But they’ve stayed with this path, and they’re both bright individuals.

“Being able to stay with the concepts and continue to develop skills is a life-long process. They’ve stayed with the ideas and things they’ve worked on for the last 10 years, and they keep getting better and better with them.”

While Casey works at Trimble, Meg is developing an app for smartphones. She couldn’t give too many details, but it will be a game that will run on several platforms.

Beyond their careers, Meg and Casey both live independently.

“I see Project Spectrum’s life skills,” Meg said. “I was able to learn what I wanted to do in life, and to apply that knowledge to practical situations. Another thing is that we’ve been very successful and we’re seeing the different ways that you succeed.

“It’s interesting because you see something outside of yourself and your own struggles and successes. It just shows that you can help other people go through everything. I like learning something new every day. I’m always going into to different projects.”

Aside from her app, Meg said that she wants people with autism to know that they can live just like “typical” people.

“I am in a relationship with my boyfriend, Steve,” Meg said. “I know that when I was growing up I felt like no one would really come to accept me and want to be with me. But Steve values me as I am.

“And I just want to stress that you should not lose hope for finding someone who loves you. A lot of people talk about jobs and daily living. But they hardly ever have articles about relationships. It can happen.”

Janzen said that the internship program is due to Bryn Fosburgh, an executive at Trimble who embraced bringing in autistic interns to give them a foot in the door for various careers.

“When Trimble bought our division of Google, he was very enthusiastic about this program,” Janzen said. “They were very excited about the internships. Now we bring in the interns every semester.

“Casey is helping kids that come in the same way he was helped when he was an intern. That’s been wonderful, and that part of the company is all due to Bryn.”

Mike and Heidi had three house rules — respect, responsibility and no excuses. Both Casey and Meg still live by those rules.

“From the outside, it looks like everything is great,” Heidi said. “But they work so hard to do the littlest things that we take for granted. They work harder in a day than I ever will.

“It’s exhausting for them in a day to navigate the world and do what it takes to function. There are times of anxiety too. They say being autistic is like being an anthropologist on Mars, you have to figure out how everything works.”

She said that only roughly 20 percent of autistic children leave home, and that 80 percent of marriages with disabled children end in divorce. High school sweethearts Mike and Heidi are still going strong at 42 years.

“Each parent has to navigate this new world and figure out what works for their child,” Heidi said. “That makes it pretty consuming, and it’s life-long, it’s not going to go away. They just have different challenges as they get older.”

Though she has no doubts that her children can take care of themselves, she said that they will always be there like any good parent.

“We’re here if they want or need us for something,” Heidi said. “But they both live independently, like we all want as grown-ups. You make mistakes, have some adventures, that’s what they’re doing."

Programs like Project Spectrum are giving a new life to how we see autism and incorporate it into society and the workforce.

When Meg and Casey were born over two decades ago, the autism rate was around one in 1,000. Today that rate is about one in 70, meaning that a significantly higher number of autistic adults will be entering the workforce in the near future and making Project Spectrum that much more important.

“For me, when Project Spectrum first started and the SketchUp people saw value in my kids, that was huge,” Heidi said. “A parent of autistic children hears constantly in school about all of the deficits there are and all of the things they’re not going to be able to do.”

Casey and Janzen are currently working to expand Project Spectrum to include a wide array of fields. The idea is that those with autism usually have a skill set of their own, think outside the box and can contribute to pretty much every line of work that “typical” people can.

In the coming years, Heidi said that she hopes to see more programs like Project Spectrum across the country that will help use the talents of autistic youth, no matter what that talent is, and that she thinks the program can also help parents of autistic children.

“When you have a positive experience — it’s rare — but you think ‘maybe those other people are wrong.’” Heidi said. “That’s what every parent wants to hear, that their kids will be ok. Project Spectrum is already giving hope, and when parents have hope, I think you parent differently.

“You can have a forward focus, there’s that hope that something might happen. I guess I’m speaking just for myself, but going into this was a very rare opportunity for them to be treated like any regular person. The fact that they are autistic was almost incidental. That’s pretty amazing.”