Girls Soccer: Niwot falls to Skyline, but bounces back against Windsor 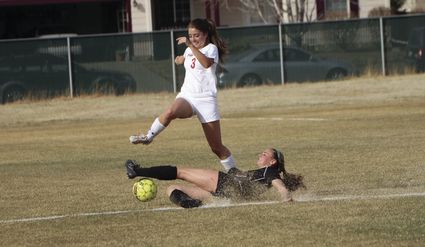 Photo by Ed Navarro Niwot’s Maddie Barkow goes for a slide against Skyline last week. The Cougars lost 4-2 in that match, but came back later in the week to defeat Windsor 1-0. Their next match is April 6 against Thompson Valley, which will be the first conference game of the season.

The only thing predictable about high school sports is their unpredictability, and nowhere was that more evident than in the performance of the Niwot girls soccer team last week.

On Tuesday, the Cougars floundered on both offense and defense in their first ever loss to cross-town rival Skyline. Blown scoring chances and a flagging defense plagued the Cougars in both halves, allowing the upstar...