Niwot drops three in a row 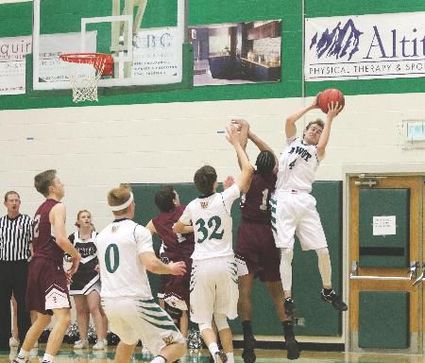 Photo by Ed Navarro Niwot’s Thomas Bounds pulls down a rebound in the first game against Silver Creek as Adam Barber (0) and Cameron Carlson (32) look on.

In a puzzling turn of events, the Niwot boys basketball team followed their inspiring win over the Longmont Trojans on Feb. 3 with three straight losses, including a 64-36 blowout loss to Mountain View in their worst offensive performance of the year. The Cougars also fell to Thompson Valley (68-54), despite a convincing win over the Eagles earlier this season, and then experienced another double-digit blowout, this time at the hands of Silver Creek (83-58).

For head coach Preston Hardy, the slump resulted from a letdown after the historic win over the Trojans. “I believe we celebrated the win against Longmont a little too much,” he admitted. “That affected how we played this past week.”

With the losses, Niwot moved to 9-12 on the season, and 5-7 in the Northern League, tied for fifth with Mountain View. They are currently ranked 34th in RPI standings, but face No. 9 Northridge in the final game of the season.

The Cougars opened the week on the road at Mountain View on Feb. 7. When these teams met at Niwot on Jan. 12, the Cougars turned the ball over a season-high 26 times en route to a 65-49 loss. In the rematch, the Cougars added below-average shooting to the mix, resulting in a mere 36 points against the Lions, their lowest total of the season. The Cougars committed 24 turnovers on the night, but shot just 35 percent from the floor, and just 5-of-14 from two-point range. Mountain View held the Cougars to single digits in three quarters, and sophomore Tommy Bounds managed just 3 points on the night.

If the Cougars were looking for a break against Thompson Valley two nights later, they didn’t get it. Earlier this season, the Cougars pulled off a 64-57 upset over the Eagles in one of their better nights on offense. This time, however, the Eagles were ready for them.

Niwot had another poor shooting night, despite the 54 points. The Cougars went 20-for-67 from the floor (30%), and just 23 percent from beyond the arc (8-of-35). They held onto the ball, turning it over just 10 times, but made it to the free throw line just five times all night.

Bounds bounced back against the Lions with a 17-point night at Thompson Valley, including three of the team’s eight three-pointers. Barber shot just 21 percent from the floor, but added 11 points for the Cougars, while senior Jake Sims accounted for three more of the team’s treys. Junior Cameron Carlson had seven points, and led the team with eight rebounds. Senior J.J. Kolakowski added six points, while serving up five assists, while senior Ethan Radatz and junior Max Towlen chipped in with a bucket each.

The Cougars finished the week with a rematch against Silver Creek, which won by 28 the first time these teams met 10 days earlier. Niwot fared a little better against the Raptors this time, losing by 25, but were clearly over matched on both sides of the ball.

Setting a scorching pace, Silver Creek took control early on, and led by double-digits after the first eight minutes (23-11). The Cougars offense showed up for the second quarter, and actually outscored the Raptors, 21-20, but Niwot still trailed by 11 at the half, despite a long three-pointer by Adam Barber as time expired.

Silver Creek shut the door on any possible Niwot comeback in the third quarter, outscoring the Cougars 22-10. They added another 18 points in the final frame, and went on to win 83-58. With the win, Silver Creek improved to 18-3 on the season, but still trails Northridge in the Northern Conference standings. They are currently ranked 10th in 4A RPI standings.

“Silver Creek is pretty good,” Hardy said of this cross-town rival. In fact, he added, the Raptors are another legitimate state championship contender, along with earlier Cougar opponents Holy Family and Northridge.

Barber paced the Cougars with 25 points on the night, his season high. He shot 53 percent from the floor (9-of-17), and was 6-of-8 from the line. He also collected 10 boards for his second double-double of the season. Bounds had thirteen points, but was clearly frustrated with the officiating several times during the game. At one point, Niwot head Coach Preston Hardy had to take his young star aside and calm him down. “Tommy is a sophomore, he still has a lot of maturing to do,” said the coach. “It is not easy playing against players two years older.”

Towlen scored eight points in this best performance so far this season, and Sims was good for another five. Senior Carter Osteen, back with the team after resting sore knees for a few weeks, had three points.

The Cougars were without the services of seniors Jesse Falk and Alec Helgeland for this game. “Jesse has torn ligaments in his ankle and it appears his season is over,” said Hardy. Helgeland, however, will be back with the team this week.

Niwot closes out the regular season with two home games, against Centaurus on Feb. 13, and Northridge on Feb. 15. The first round of 4A playoff games begins the week of Feb. 20th.