One family's battle against Batten disease 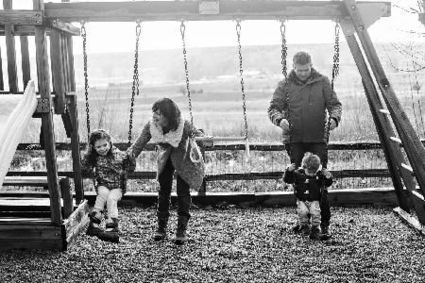 Courtesy photo Mila and her brother Azlan, with Julia Vitarello and Alek Makovec, Mila’s mom and dad, before she was diagnosed with the rare neurodegenerative disorder, Batten disease.

Mila Makovec was an outgoing toddler who liked to sing, climb, hike and run. She enjoyed playing in the snow and watching Elmo on TV. But that all changed in late 2016, when her symptoms for a rare neurodegenerative disorder known as Batten disease became acute, and doctors at Children’s Hospital were finally able to make the diagnosis of a disease that affects only about one in every 100,000 people.

Batten disease causes a variety of symptoms, from seizures and dementia, to gradual loss of sight and motor skills. Mila is now blind and suffers from a host of other symptoms, and the tragedy is compounded by the fact that only a year ago, she seemed like a happy and healthy child, showing only minor symptoms—such as occasional tippy-tap steps, and feet that turned in when she walked.

“She came into the world strong and radiant and grew up to be an energetic, giggly little girl,” writes Mila’s mother, Julia Vitarello, on her foundation’s website, Stopbatten.org. Vitarello launched the organization to raise funds for the development of a drug to cure or at least curtail the degenerative effects of Mila’s varient of the disease. The disease currently has no known cure, and sufferers rarely live beyond their teens.

Because of Batten disease’s rarity, it’s unlikely that a pharmaceutical company would launch an expensive clinical trial on a treatment with such a small potential market. In addition, federal funding for genetic research has fallen off in recent years, with more research organizations competing for flat-lined government dollars—or about $30 billion per year, according to a study conducted by the Genetics Society of America.

But thanks to the advent of crowdfunding sources, such as Indiegogo and Kickstarter, and the potential reach of social media platforms like Facebook and Instagram, the public now has more tools with which to have an impact on life-changing scientific breakthroughs.

Leading the charge are families like Mila’s. According to Vitarello, they play a significant role in finding funding sources for scientific research, “because of the urgency they feel, especially families with something like Batten.” She mentioned the disease’s fast, degenerative pace, and the heartbreak inherent in a disease that impacts a seemingly healthy, and even precocious child, as was the case with Mila. Because the disease is hereditary, there’s a 25 percent chance that Mila’s younger brother, Azlan, who’s three, also has the disease. Right now, it’s a waiting game for this Gunbarrel family.

Vitarello is a can-do sort of person and though she’s been emotionally devastated by Mila’s decline, she’s used the foundation as a place to funnel her energies. Her husband, Alek Makovec, is an aerospace engineer who Vitarello said understands the complexities of where scientific and technological progress is headed. “We put our strengths together,” she said. “We…feel like it’s our job.”

She admitted that science is slow-moving, and to make advances takes enormous resources. “To get to a cure faster takes money and awareness—we can fund [researchers], and have a ripple effect through the media—so that it’s more on people’s radar, including doctors,” she said.

The foundation aims to raise $4 million, which will include the research’s “initial discovery phase (mouse models and safety studies), production of the gene-therapy vector, and ultimately the design and launch of the clinical trial itself,” the website explains. Vitarello also noted that the family’s hope “is that scientific advances we fund will also help [all the] Batten [varients] as a whole, and can be used to combat additional rare diseases affecting hundreds of millions of people worldwide.”

Vitarello said she couldn’t do it all alone and friends of the family in several cities across the US, as well as in London and Italy, “have rallied on Mila’s behalf,” she said.

They’ve hosted fundraisers, including one in Denver to be held on April 10, which will be co-chaired by Robin Hickenlooper at the governor’s mansion. “We’ve been really blown away by our friend’s generosity and support,” she said.

This includes the efforts of two family friends who work for the Boulder offices of the advertising agency, Crispin, Porter + Bogusky (C, P + B). “Their daughter and our daughter were in music class together,” Vitarello explained.

The company developed an emotional, high-production video of Mila’s childhood, a mini documentary that shows her singing and sledding, laughing and playing with her brother, while detailing the minor symptoms that started presenting at three years of age, and then at four and five.

“It’s the most powerful tool we have,” Vitarello said. Her friends at C, P + B delivered the video within a week of Mila’s diagnosis, and in it, they “really tried to show that she was like every other child—it’s so moving because she could have been anyone’s child—it helps people relate to our story.” The footage is taken by Mila’s father, the family videographer.

The Stop Batten foundation has raised $169,869 toward its $4 million goal at the time this article went to press. To find out more, or to make a donation, please visit Stopbatten.org.