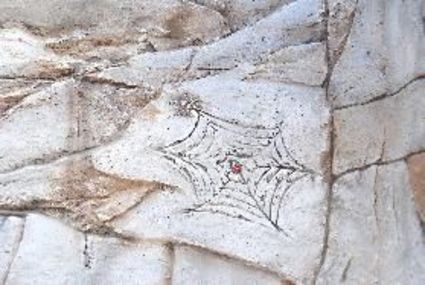 One of the park’s most notable and unique features are the small, custom-crafted, painted stone creatures—such as bats, insects, frogs, and lizards that inhabit the area—in various locations on the play structures and other elements throughout the park. Several of these stone animals have been severely damaged or destroyed, some appearing to have been chiseled or hammered at, while others have been removed entirely.

Niwot Children’s Park is located at the corner of Murray Street and 1st Avenue, next to Whistle Stop Park. The park was built through a community fundraising effort with over $500,000 contributed by 233 donors, and another $250,000 of in-kind donations of labor and materials. The park opened Oct. 2, 2016, and the damage is believed to have occurred sometime before Thanksgiving.

The park is managed by the Niwot Cultural Arts Association pursuant to an agreement with Boulder County. NCAA President Bruce Warren said the organization is in the process of contacting the manufacturer of the play structures to find out how the damage can be repaired. Much of the damage was located inside a small tunnel under one of the play structures.

Following the NCP’s recent Facebook posting, many Niwot residents left comments regarding their disappointment and frustration, as well as offers of support for what might be needed to repair the damage. One reader wrote, “We love all those special details! Argh!! It is infuriating that someone would damage them purposely.”

The park is open during daylight hours but is closed every evening.

If you have information or inquiries, please write to: niwotchildrenspark@gmail.com