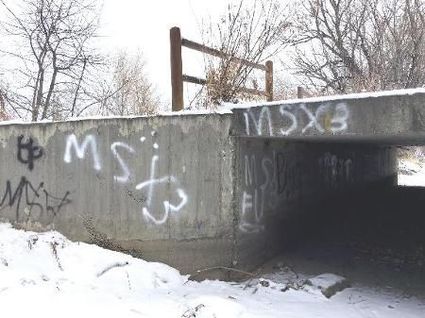 Photo by Jeremy Jaeger Graffiti at “Chicken Tunnel” on the Cottontail Trail.

On Dec. 5, 2016 the Boulder County Sheriff’s office filed a report of criminal mischief with respect to graffiti along the Cottontail Trail in Gunbarrel. On Jan. 1, 2017 Gunbarrel Estates neighbors started removing it.

The graffiti was found east of North 71st St. along the Cottontail Trail by the Boulder and Left Hand Ditch, in two separate locations. The first location is known as First Falls while the second is the drainage tunnel that runs from Gunbarrel Estates Park under Park Lane and into the ditch that’s known as Chicken Tunnel.

The graffiti was spray-painted on the trunk of a tree and on the concrete walls of the drainage ditch which runs alongside the Cottontail Trail, and consisted of two separate markings, “MS-13” and “Los Zetas.”

Los Zetas is a criminal cartel based in Nuevo Laredo, Mexico, which began as the mercenary wing of the Gulf Cartel before separating from it in 2010. MS-13, also known as Mara Salvatrucha, originated in Los Angeles in the 1980s within the community of immigrants from El Salvador, and in October 2012 was designated a “transnational criminal organization” by the US Treasury Department.

Both Los Zetas and MS-13 are involved in drugs, arms and human trafficking, and are also each notorious for their particular brutality and violence, a practice which they are known to employ as a method of intimidating the residents of the communities in which they are established.

No suspect was identified in the incident report. While Boulder County Parks and Open Space was notified of the graffiti and requested to paint over it, Gunbarrel Estates residents were tired of waiting and started removing the graffiti at First Falls themselves. Prompt removal of graffiti can be a deterrent to vandals.