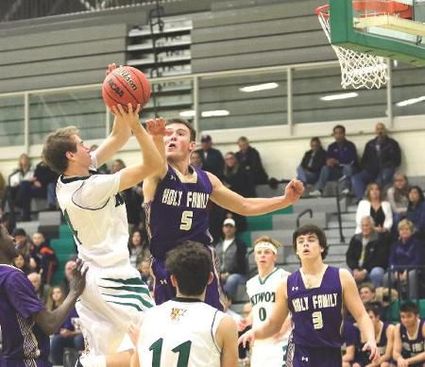 Photo by Ed Navarro Niwot’s Thomas Bounds goes up for a shot as Ethan Radatz (11) gets set for a rebound against Holy Family.

Going into their game against the Holy Family Tigers (3-1), Cougars head coach Preston Hardy knew his team was facing an uphill battle.

“We will have our hands full,” he remarked prior to the game. “They are one of the best 4A programs in the state.”

Unfortunately for the Cougar faithful, the Tigers did their best to prove Hardy correct, cruising to a 70-40 victory over Niwot last Tuesday night. With the loss, the Cougars fell to 1-2 on the season, with three non-conference games to go before winter break.

“Now we know what top competition is,” Hardy said. “Hopefully we can use that to our advantage.”

For the second consecutive game, the Cougars struggled to find the net in the early going. The Tigers jumped out to a 20-4 lead at the end of the first quarter, which they extended to 36-13 at the half. The Cougars doubled their offensive output in the second half, but the Tigers’ 24-point third quarter put the game out of reach.

No Cougar reached double digits in scoring on the night. Junior center Cameron Carlson hit 3-of-4 from two-point range, for a game-high eight points, while senior Adam Barber scored six, including one of the team’s three 3-pointers. Seniors Donato Rios, Carter Osteen and Ethan Radatz each had five points, while senior Connor Ryan chipped in with four.

Sophomore Thomas Bounds had another of the threes, on his way to seven total points. He was the Cougars’ leading rebounder, with four, and added two deflections.

“We had some spurts of good,” Hardy said of his team’s performance. “Now we know what we can do well and we will build on that.”

The Cougars had a week-long break before heading out on the road for the last week of the school year. On Dec. 13, the Cougars squared off against Skyline (4-1), and will head to Berthoud (1-6) on Dec. 16. On Dec. 19, the Cougars will play Standley Lake (0-6) at the Pepsi Center.

“We are excited to get back on the court and build off of a good week of practice,” Hardy said.