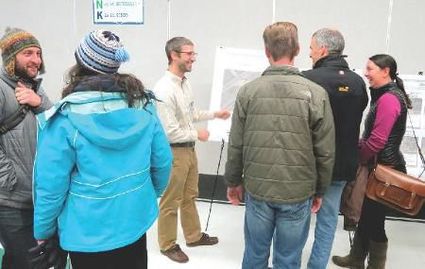 A public meeting facilitated by officials of the Boulder County transportation department was held Dec. 7 in a packed room at Niwot Elementary School. The meeting aimed to gather community input about the county’s continuing Quiet Zones’ efforts, and to further explain the project costs and timelines. Based on the majority of the crowd’s reactions, the project couldn’t proceed fast enough. This was the first in what will be a series of similar Q&A opportunities.

Communications specialist Andrew Barth said public comments on the county’s website were more like 60-40 percent in favor of Quiet Zones, so the tone in the audience may have come as a surprise to officials.

Quiet Zones refer to the safety improvements made to roads that cross railroad tracks, eliminating the requirement for train horns to sound at those crossings, according to Federal Railroad Administration (FRA) regulations established in 2005. County officials said these improvements cost between $200,000 and $550,000 per crossing, a sticking point with some audience members.

One resident asked if materials for improvements could be sourced more inexpensively. Co-presenter and long-range transportation planner Marc Ambrosi told her the answer was no. “The infrastructure required is made by very few companies. There’s an industry standard and it’s built to certain specifications,” he said.

Those improvements include four-quadrant gate systems, gates with channelization devices or raised medians, and wayside horns, which are horns placed at fixed points at crossing sites.

The county isn’t in favor of the wayside horn option, Ambrosi told the crowd, because some of the horns in Colorado have struggled with faulty software, and it would be fruitless to spend money on horns that don’t work, thereby losing their FRA-sanctioned Quiet Zone designation.

While the gates-with-channelization scenario provides the cheapest option, sometimes the solution isn’t feasible because it cuts off access to a driveway or other community property, explained co-presenter and Multimodal Division Manager Scott McCarey.

Niwot resident Chet Newman suggested installing Railroad Collision Avoidance Systems, or sensors leveraged from the automotive industry that cause trains to stop if there’s an obstruction on the tracks. “The train horn can go the way of the buggy whip,” he said. “There are better ways to do this.”

“We haven’t heard that one,” McCarey said.

Under the FRA’s Train Horn Rule, locomotive engineers begin to sound their horns between 15 and 20 seconds in advance of all public grade crossings, in a pattern of two long, one short, and one long blast that’s repeated or prolonged until the lead locomotive enters the grade crossing.

The rule doesn’t stipulate the duration of the blasts—a fact that wasn’t lost on certain audience members.

“England has a marvelous system,” said one resident, which he described as a series of gates, with lights and a gentle ringing of bells. “Why do [engineers here in the U.S.] blow the horn while they’re in the intersection? There’s a difference in individual conductors—some are more humane and some…are not.” Mentioning the horn blasts beginning at Independence Road, he added, “If the first 10 don’t get you, the second 10 will.”

According to the regulation, the minimum sound level of a blast is 96 decibels, with a maximum of 110 decibels. In a noise study conducted by Purdue University, 110 decibels is the “average human pain threshold,” and is 16 times as loud as 70 decibels, which the study considered “annoying to some people,” or about the level of noise made by a vacuum cleaner—110 decibels, on the other hand, is akin to the sound produced by live rock bands.

One resident said she liked the noise. “They are there for safety issues,” she said. “We have neighbors and their little boys enjoy the train noise just as we do.”

McCarey said he was grateful for her comments, particularly since her opinion was clearly in the minority. He asked, “Is there something else we can do that would honor the nostalgia and the history of the trains?”

He added that Highway 52 is a state highway. “That’s not our road. We can’t fix everything.” The county, he said, would “do its best to provide the most benefit for the most people.”

McCarey’s office used mapping software to determine the density of residents impacted by train horn noise at the crossings under discussion. They then quantified the noise reduction potential of each residential parcel with the aim to maximize the number of houses affected. But there were problems with the initial findings, as multi-dwelling apartment units and manufactured housing developments had been counted singly. So findings would have to be recalibrated. “We’re aware of that,” McCarey said.

With a Quiet Zone designation, McCarey said the noise at the Niwot Road and Second Avenue crossings would fall to 65 decibels, or about the level of restaurant conversations, according to the Purdue study.

The cost for both would be between $602,000 and $962,000, and together seem to be likely candidates for this round of improvements based on population impacts. Independence Road seems an unlikely candidate for similar reasons, though shouldn’t be ruled out as it may be bundled in with City of Boulder Quiet Zones’ plans, McCarey said.

The county hopes to use the $1.7 million in available funding to construct as many Quiet Zones along Highway 119 as possible—funds derived from the Denver Regional Council of Governments (DRCOG) that were put aside for the Northwest Rail Corridor through the FasTracks program, to the tune of $1.4 million, with the remainder funded by the county. These funds are separate from the $1.26 million designated for City of Boulder Quiet Zones projects.

The amount, however, won’t be enough to address all the unincorporated county crossings along the corridor that begin at 83rd Street and include Second Avenue, Niwot Road, Monarch Road, 55th Street, Jay Road and Independence Road.

One resident asked what will happen to those crossings left out this first phase of the project. Ambrosi said that the City of Longmont is well ahead of the curve in identifying other funding sources, particularly through Transportation Investment Generating Economic Recovery or TIGER grants. “We’re going to be working with them,” he said.