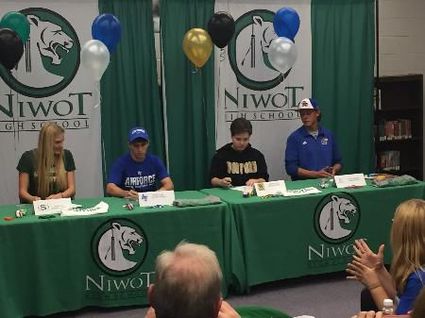 Niwot wrestler Tommy Stager will take his considerable talents on the mat to the Air Force Academy next year. Stager, a senior, signed a National Letter of Intent Nov. 10 to wrestle at the Academy next year after considering offers from Princeton, the University of Chicago, Washington & Lee and Colorado School of Mines.

Stager earned a bronze medal last summer at the AAU tournament, narrowly missing All-American status. Stager’s overall record for the 2015-2016 campaign was 150-31, including the CHSAA high school season (47-5), pre-season/post-season national tournaments (48-13), and Freestyle/Greco-Roman tournaments (55-13). In Colorado high school competition, he took sixth at 113 pounds as a freshman, fourth at 120 pounds as a sophomore, and third at 132 pounds as a junior, all in Class 4A.

Stager thanked his coaches, his family, and everyone who came to the signing ceremony. “And a special thank you to my mother and my grandmother,” Stager said shortly before signing. He later explained that both were worried about him going into the military, but in the end, supported his decision.

“What Air Force is about – integrity and honesty – that’s the type of person I want to be and aspire to be,” Stager said. His decision was also fueled by an interest in aviation. “I want to be a pilot,” he explained. He was able to speak with others who had gone to Air Force, including a wrestler who wrestled under his current coach, Bobby Matthews.

Stager’s brother, Nick Stager, just completed his wrestling career at Harvard University last spring where he posted an 8-5 record on the year.

Shortstop Skye Messinger will be playing baseball at the next level at the University of Kansas, where he will compete in the Big 12 Conference. The level of competition was one of the primary reasons he chose Kansas, after considering opportunities at the University of Northern Colorado, Minnesota, Nebraska-Kearney and Dixie State. “I just want to see the best competition in the nation,” Messinger said. At this point he is undecided about his major in college.

“I want to say ‘thanks’ to all of my coaches,” he noted just before signing the National Letter of Intent. He has primarily been a shortstop at Niwot, but plans to play “anywhere they put me” for the Jayhawks. Messinger has started ever since his freshman season, when he hit .340 for the state runner-up Cougars. Last season he batted .493 with nine doubles, two homers and 24 RBI’s, all tops on the squad.

Although he stopped to check out the school last summer, he made an official visit to Kansas this fall. “There are great coaches and great facilities,” he said. “It’s a great campus and a great town.” Four players from KU were selected in the major league draft last June, including a 7th-round pick. Kansas finished last in the Big 12, however, with a 6-17 conference record and a 20-35-1 overall record.

Messinger credited his brother, Niwot grad Connor Messinger, who just completed his collegiate baseball career at Nebraska-Kearney, with getting the attention of the Kansas coaches. “At the futures game at Coors Field, he went up to the head coach and talked to him about me, saying how much he cares. He’s been like my agent, sending out emails and everything.”

The younger Messinger made quite an impression on everyone who saw him at the all-star game of underclassmen last summer, hitting a home run with a wood bat on the major league field.

When Sarah Falk dons her volleyball jersey next year, she might just get a sense of deja vu. Falk signed an early letter of intent to play volleyball for the Division I Sacramento State Hornets, whose predominantly green and white color-scheme will probably seem a little familiar.

Of course, that’s not what attracted the 6’2” outside hitter to the California school, located in the state’s capital. “I went out there last spring break, and I loved the coaches and the program,” said Falk. “The campus is beautiful. It was a perfect fit!”

Falk, whose season just ended with a loss to Holy Family in the state volleyball tournament, will be joining a Hornets team that is currently 19-11 overall on the year, and is in first place in the South division of the Big Sky Conference, which also includes the University of Northern Colorado. Next weekend, the Hornets will be playing as the No. 2 seed in the Big Sky tournament, where a win will earn a bid to the NCAA volleyball tournament.

“I’m extremely happy for Sarah and proud of what she’s been able to bring to the program,” he said. “I think she’s an incredibly gifted athlete. I’m happy for her to have the opportunity to play in college.”

Falk has been on the varsity squad each of her four years at Niwot, and is in her second year as captain. This season she led the team in aces, with 39, and was second only to Mackenzie Fidelak (331) in kills, with 221.

Brown said that Falk will be bringing more than her athleticism to her new team, however. “Sarah’s an outstanding person, and I’m sure her coaches are happy to have her not just as an athlete.”

Falk said she hasn’t settled on a major yet, but will probably study business. “It was a goal of mine to play at the highest level I could, and they made me a great offer,” she said.

Though girls lacrosse is one of the fastest growing high school sports in the state, for some reason, it has yet to penetrate much of Northern Colorado. Of the 53 high schools throughout the state that field a girls squad, just three are located north of the Boulder turnpike—Centaurus, Thompson Valley, and Rocky Mountain in Fort Collins. So when Niwot High student and lacrosse goalie Morgan Pittser went looking for a team to join, she found herself short on options.

Luckily for Pittser, Centaurus found itself in need of another keeper at about that same time. So, for the past two seasons, Morgan has commuted the 11 miles south to play in goal for the Warriors.

Next year, she will have the opportunity to make history as a member of the first women’s lacrosse team at Wofford College, a small liberal arts college located in Spartanburg, S.C. Pittser inked an offer from the school and will join the Terriers for their inaugural lacrosse season in the spring of 2018.

“It’s a brand new program,” Pittser explained. “There are girls there now practicing and training but our games will not start until my freshman year.”

With just under 1,600 students, Wofford has a much lower enrollment than the typical NCAA Division I school, which is just fine with Pittser. “I was really drawn to that small community,” she said. “It felt like home there, and it was nice.”

In her two seasons with the Warriors, Morgan served as the team’s number one goal keeper. In 2015, Pittser’s first year with the team, the Warriors went 12-6, and advanced to the semi-final round of the state tournament. Pittser’s save percentage of .514 was the 13th highest in the state.

Last year, under new head coach Todd Breithaupt, Centaurus finished the year 5-8 and missed the playoffs for the first time in the program’s history.

Pittser plans to study art history at Wofford, and hopes one day to become a high school art teacher “I’m really excited to go on a new adventure and expand my horizons,” she said.