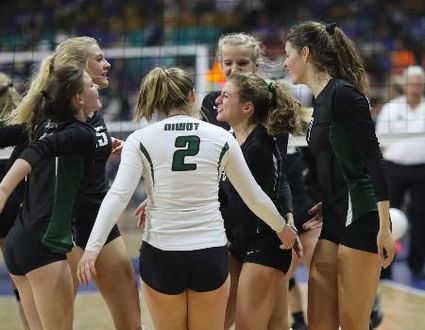 Going into last weekend’s Class 4A state volleyball tournament at the Denver Coliseum, Cougars senior outside hitter Sarah Falk said her team was thrilled to be headed to be playing on the big stage.

“The team is definitely really excited. It’s been such a fun year, and we just want to take it to that next level.”

Falk, who earlier in the week signed a letter of intent to play volleyball at Sacramento State, said her team was also looking forward to the weekend’s match against rival Holy Family.

“Oh, we’re super excited about that.”

Head Coach Preston Brown was also looking forward to the match, but knew his team would have its work cut out for it. The Tigers, who went 24-5 overall on the season, have had Niwot’s number lately, and Brown foresaw another stem-winder.

These two teams did not disappoint. In an edge-of-your-seat five-set thriller, Niwot battled back from the brink twice: first, to force a fifth set after dropping the first two of the match and then, to a 14-14 tie in the fifth set, after being down 8-1.

But there’s very little margin for error in the fifth set of a volleyball match.

“The balls bounce funny ways sometimes, and you get a little out of whack,” Brown said.

So, Niwot’s season came to an end after a mishandled hit and missed block gave the Holy Family Tigers a 16-14 victory.

“You’ve got to give credit to Holy Family,” Brown said. “They held it together when we battled back, and it came down to the wire. “It’s disappointing, for sure, that we weren’t able to close it out,” continued Brown. “But I’m proud of the way the girls played, both all season long and how they battled at state.”

A Cougar victory over No. 2 seed Eagle Valley the day before set the stage for the clash against Holy Family.

“We took care of business in knocking off the top seed in our pool,” Brown said on the win. “We made that second match important for both teams.”

Indeed, the Cougars made easy work of the second-ranked Demons on Friday, winning in straight sets 25-23, 25-14, 25-19. Junior Mackenzie Fidelak had 10 kills for the Cougars, including a big hit to win the first set. Sophomore Audrey Richard served up five aces against the Demons, including second-set game winner.

Sophomore defensive specialist Rachel Priola led the team in digs, with 12. Sophomore Zoe Gonzales had three blocks in the match, and two kills. Senior Brynn Chavez had a block and six digs, while libero Ashley Bradbury had eight digs.

Coach Brown wasn’t surprised that his team was able to beat Eagle Valley, which came into the tournament ranked number two in the state. “Statistically, we were well matched,” he explained. Later that day, Eagle Valley faced off against Holy Family, but fell in four sets 17-25, 18-25, 25-21, 16-25.

So it was with a state semi-final berth on the line on line that Niwot faced off against Holy Field in their second pool match on Saturday.

It was apparent early on that the Cougars had a fight on their hands. Niwot fell behind Holy Family early in the first set, as they struggled to find an answer to junior right side hitter Rachel Siurek, who transferred to Holy Family this season from St. James Academy in Kansas, which finished fourth nationally a year ago in MaxPreps rankings. A clearly rattled Niwot squad would drop the first set 25-19, then the second 25-20.

Between the second and third sets, Brown said the coaches talked to the team about not beating themselves.

“We were making way too many errors,” Brown said. “We were giving away points.”

Niwot’s buttoned up its blocking and hitting in the third set, winning it on Richard’s second ace of the match, 25-16. In the fourth set, Sarah Falk had two big kills to put the Cougars on top 25-19, forcing a decisive fifth set.

“We were able to clean up our serving as the match progressed, and we were a little more effective in our hitting than we were earlier on,” Brown explained.

It seemed that the Cougars had momentum going into the last set, but Holy Family quickly reasserted control. In a stunning reversal, the Tigers quickly went up 8-1 on the Cougars, and a startled Niwot coaching staff burned through two timeouts. After regrouping, the Cougars went on a 13-6 run to tie the game at 14.

But in the end, even that would not be enough. In heartbreaking fashion, Niwot fell just short to a hard-hitting Tigers team that would ultimately advance to the tournament finals before losing.

After the game, senior Courtney Smoljan said she was disappointed in the outcome, but not in her team.

"We all just love each other so much,” she said. “When things start to hurt a little during the game, it’s always great that you have your teammates there with you who are going through the same thing. It’s a really cool thing to be a part of.”

Smoljan is no stranger to state-level competition. She was also a member of Niwot’s cross country team, which placed eighth overall at the state meet in October. “Even though it didn’t turn out how we wanted, it’s still a great achievement to get that far,” she said.

Niwot finished the season with an 18-9 record overall, plus the Northern League and 4A Region 11 title. Three varsity starters will graduate, but Brown thinks they’re set up well for continued success.

“It was a great season,” Brown said. “We’re still a young team, and I’m looking forward to next year already.”