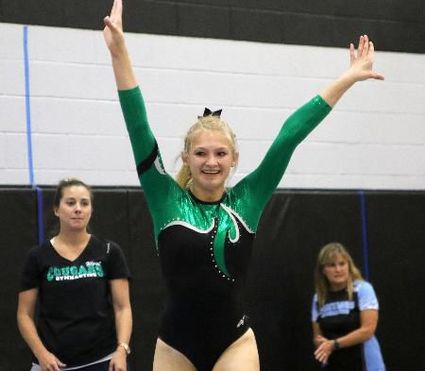 The Niwot High School gymnastics team went to the 4A state gymnastics meet on Friday, November 4 and Saturday, November 5, coming home with a second place finish and a final score of 177.775.

The reigning 4A champions from last year went into the meet state meet after coming in third at regionals with a score of 175.4, behind Green Mountain High School, 177.675, and Elizabeth High School, 176.725.

Niwot was able to beat out Elizabeth High School, a tough opponent in the state meet, but finished behind Green Mountain, which received a score of 182.3. Despite a new head coach in Marisa Purcell this year, and a plethora of injuries affecting the team, the Niwot squad was able to band together for the title run.

Senior Alexis Carroll took the top score in vault with a score of 9.6.

Final individual events took place on the second day of the competition, where the Niwot gymnasts showed their many strengths. The team finished another season with an outstanding performance, and although they weren’t able to defend their title at the state meet this year, they finished another very successful season.