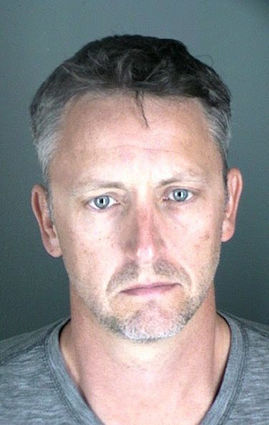 Photo courtesy of Boulder County Sheriff's Office Dylan Thomas Hollingsworth, 43, of Longmont, was arrested for an assault on a student that occurred two weeks ago.

On Nov. 4, Niwot High School head football coach Dylan Hollingsworth, 43, was arrested for assaulting a student during a weight lifting class the prior week.

Hollingsworth’s arrest was the culmination of a joint investigation between the Sheriff’s Office and the St. Vrain Valley School District (SVVSD) human resources department, launched after the latter received a report from Niwot High School officials concerning an alleged physical altercation between a teacher and a student.

Investigators contend that on Wednesday, Oct. 26, Hollingsworth confronted a 17-year-old student who repeatedly used profanity during weight lifting class, despite at least one earlier warning to stop. Hollingsworth purportedly applied pressure to the student’s larynx with two fingers, restricting the student’s air supply, and then kneed the student in the groin, causing the student to fall to the ground. According to investigators, at least two-dozen other students witnessed the alleged assault.

In an email sent to parents on Friday following the arrest, Niwot Principal Eric Rauschkolb wrote that school officials received a report of the alleged incident late in the previous week, and immediately referred the matter to the human resources department at St. Vrain Valley Schools. At that point, continued Rauschkolb, the district launched an investigation in conjunction with the Boulder County Sheriff’s Office, and placed “the teacher” on administrative leave pending the outcome.

Rauschkolb’s message did not mention Hollingsworth by name, and, citing the situation’s “sensitive nature,” did not provide any details of the alleged assault. He closed his message by reiterating a commitment to student safety, and inviting anyone with further questions to contact him directly.

“I want to take this moment to emphasize our top priority: the well-being of our students. Our core values are built on the constant belief of a respect for all,” Rauschkolb wrote.

Hollingsworth, who joined the Niwot staff in 2015 as head football coach and a health and P.E. teacher, is also the school’s girls’ golf coach. District officials refused to comment on the status of his future employment with the district, saying only that he is on administrative leave, pending results of the pending legal case. Assistant football coach and teacher Scott Thomas was named interim head football coach for the final game of the season.

“It’s a personnel matter, and there’s an ongoing investigation,” Matt Wiggins, Director of Communications for SVVSD, said. “At this point, we’re not able to provide any additional details.”

Hollingsworth will be formally charged in Boulder County court on Dec. 8 at 1:30 p.m.