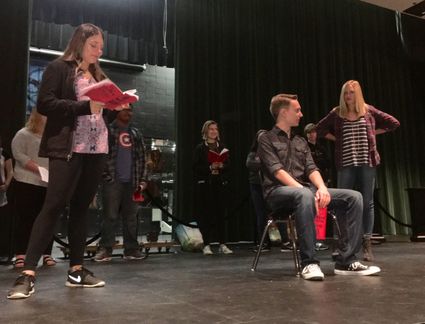 Photo courtesy of NHS NHS advanced drama students (from left) Olivia Jakel, Evan Clark and Jaiden Cruger rehearse a scene from their upcoming play, Murder in the House of Horrors.

The Niwot High School drama department aims to keep its audiences guessing with its upcoming play, Murder in the House of Horrors. “It is the first interactive play that Niwot has ever done, and is shaping up to be a ton of fun,” Drama Teacher and Director Erin Murphy said.

The play is set in the Hamilton Museum where audience members attend a lecture by Dr. Dirk Carlson, as part of the museum’s Monsters, Murderers and Mad Men Speaker Series. During the talk, the projector malfunctions and the auditorium is plunged into darkness. When the lights come back on, there’s a murder to be solved. The audience members then become both witnesses and suspects as the cast works to solve the mystery and recover the stolen treasure.

The play runs from Thursday, Oct. 6 through Sunday, Oct. 9; showtimes are 7 p.m. for the first three performances and a 2 p.m. Sunday matinee. Tickets are $8 general admission, and $5 for students and seniors. Tickets can be purchased at the door, through an advanced drama student, or by calling 303-652-2550.