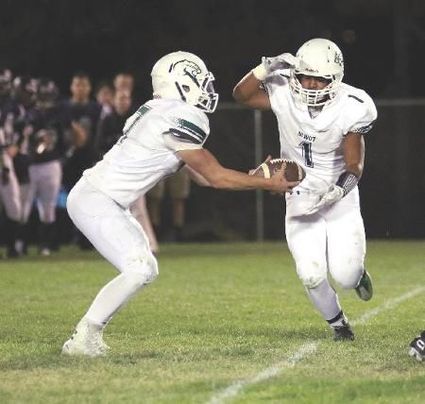 Heading into the locker room at halftime of their game against the Air Academy Kadets, the Niwot Cougars found themselves in familiar territory – on the losing end of the first half score.

For the third consecutive game, Niwot’s first half offense was lackluster, mounting just a handful of drives and scoring just a single touchdown. The defense, meanwhile, gave up big play after big play, and couldn’t seem to get off the field.

But they are finishing strong. In the second half, Niwot outscored the Kadets 33-7 and went on to win the game 40-28.

So what’s behind these comebacks for the Cougars? Coach Hollingsworth admitted he isn’t exactly sure, but he knows that by being behind, his team is gaining valuable experience and learning to better handle adversity.

“We don’t always want to be in a position of adversity, though,” he added.

There were a few bright spots for the Cougars in the first half. During their second possession of the night, senior quarterback Matt Baun connected with senior tight end Alex Oelsner for a touchdown. It was the first of Oelsner’s two touchdowns on the night.

But it wasn’t until the second half that Niwot’s offense really came alive.

On their first possession, Cougar quarterback Trae Gomez came in off the bench and led the team on a sustained drive that ended with a Jeremy Hollingsworth 4-yard touchdown run.

On the Kadets’ next drive, Niwot’s defense recovered a fumble in Air Academy territory, giving the offense a short field. Two plays later, Hollingsworth ran it in from five yards out, and kicker James Lerner added the extra point, tying the game 21-21 as the third quarter ended.

The Kadets scored next on a long pass play, pulling ahead 28-21. However, that lead would be short-lived. During its next drive, Niwot scored quickly on a long run from scrimmage by Gomez, tying the game at 28.

The Cougars struck quickly again on their next possession, this time on another big play. However, the extra point attempt failed, giving the Cougars a six-point lead with six minutes remaining in the game.

The defense held the Kadets scoreless on their final two possessions, while the Cougar offense added another rushing touchdown. The final score was Niwot 40, Air Academy 28. With the win, the Cougars moved to 3-0 on the season for the first time since 2005. It is also the first time they’ve won more than two games in a season since 2008.

Coach Hollingsworth was pleased with the win, especially with his team’s performance after the break.

“Trae Gomez came off the bench in the second half and gave the team a spark. He made some big plays for us using his legs.” Hollingsworth said he will continue to platoon Baun and Gomez at quarterback, at least for the foreseeable future.

But he continues to be troubled by his team’s lack of production during the first half. “We need to get the defense off the field quicker,” said Hollingsworth.

The Cougars will be back in action on September 23 against Mountain View for their homecoming game.