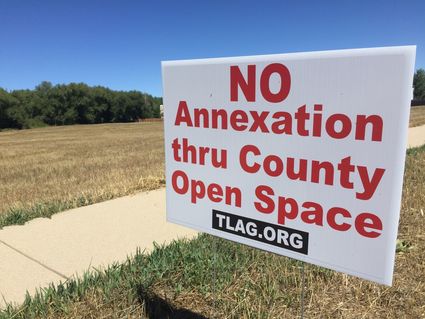 Photo by Aurelia Pollard TLAG's sign in opposition of annexation and a proposed affordable housing project sits on the north parcel of land on Twin Lakes Road in Gunbarrel.

The third floor of the Boulder County Courthouse was filled once again as people attended a joint public hearing of county commissioners and planning commission on Tuesday, August 30, to discuss the proposed affordable housing at Twin Lakes.

County Commissioner Elise Jones explained that the reason for the joint hearing was so that people don’t have to come multiple times to give their testimonies. She said they wanted to hear from everyone who has something to say on the issue, “Everyone has a right to be heard.”

In the staff’s report, it’s concluded that urban services are readily available, and building on these parcels would alleviate the scarcity of affordable housing and help achieve housing goals. Norrie Boyd of the BCHA said the permanent affordable housing would fit in with the existing neighborhoods, and benefit the community as a whole.

“What we envision on these two properties, owned by BCHA and BVSD, are permanently affordable housing developments that complement the surrounding neighborhood in both density and design,” Boyd explained. “That respect the environment and wildlife, and most importantly provide broad community benefit as well as local neighborhood benefit.”

Land is not easy to come by in Boulder County, and Boyd sees this as an opportunity that cannot be passed up.

“This is a once-in-a-generation opportunity and it’s located in an area with very little affordable housing,” Boyd continued. “Especially permanently affordable housing, which is what drew us to this property in the first place. It’s a rare availability of affordable land.”

TLAG Chairman Dave Rechberger didn’t share the same views as Boyd, and believes the group’s proposal of open space is the best decision of the two.

“It does not increase rural residential densities,” Rechberger said of TLAG’s position. “It expands the one and only open area that’s the heart and soul of Gunbarrel, that we can use for recreation and community gatherings. It preserves wetlands [and] it preserves wildlife corridors.”

Along with concerns of scarce open space and wildlife, TLAG (which has around 1,350 members from 19 different neighborhoods in the City of Boulder and Boulder County) is also concerned about the affects additional buildings will have on the surrounding infrastructure and hydrology.

“The development creates additional strains on our resources and infrastructures,” Rechberger said. “They are crumbling as it stands today. We’ve had 12 water main breaks on the main line coming through Twin Lakes Road, two in just the past month.”

Nearly 100 people spoke at Tuesday’s hearing, which lasted almost six hours. For as many people who spoke in opposition to the proposed affordable housing, a good number of people voiced their support of the proposal.

Laura Kinder, who’s a member of the Boulder County Department of Housing and Human Services Advisory Committee, and her family were evacuated from their home during the recent Cold Springs fire, and didn’t know if they’d be searching for a new place to live. Luckily her home was spared, but she experienced how hard it can be to find affordable housing in Boulder County.

“Affordable housing is a must in our county,” Kinder stated. “I challenge anyone to find affordable housing right now, as I tried to find it in July. Just as we treasure the diversity of our wildlife and wildlands, diversity in our neighbors and neighborhoods sustains our economy and our sense of community, and we all thrive. It is right to have our firefighters, nurses, bus drivers and teachers live next door, not the next county over.”

President of the Boulder Valley Education Association, Tina Mueh, echoed Kinder’s statements and believes it’s important for people to be able to live where they work.

“The lack of affordable housing within our district boundaries directly affects our district’s ability to hire well,” Mueh explained. “The problem of not being able to live where you work will get worse, and it threatens the quality of our school system.”

However, not everyone shared in the support for the affordable housing project. Longtime Gunbarrel resident, Deborah Prenger, voiced her concerns to the commissioners and planning commission about what increased density will do to the Twin Lakes area.

“You can do a viable lower density plan,” Prenger said passionately. “You have to consider that the increased density is going to ruin the drainage. Where’s the water going to go? Where are the animals going to go?

Lawyer and Boulder resident, Jeff Flynn, said he didn’t think a compromise had been made between the stakeholders group. “They talk about compromising but then the net result is, there is no compromise,” Flynn said. “It seems like the affordable housing group is getting everything they want and Twin Lakes is not getting anything that they want, and that’s wrong.”

Jason McRoy, who’s also with Boulder County Housing and Human Services, said that the BCHA has provided housing for many people who wouldn’t otherwise be able to live in Boulder County, and continues to do so, so people can live and work in the same community.

“BCHA currently provides housing for over 1,200 individuals across 580 plus households,” McRoy stated. “The majority of adults are either wage earners, living on retirement or fixed incomes, with average household income levels around $25,000 a year for a household of two… Because of BCHA affordable properties, these people can work in their community.”