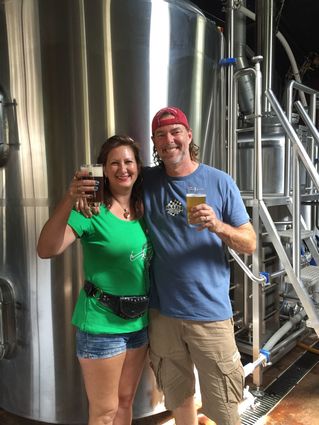 Owners of Bootstrap Brewing Company, Steve and Leslie Kaczeus, are gearing up for big changes at their brewery in Niwot, located in Cottonwood Square.

The couple recently signed on with Coors Distributing Company (CDC), after months of negotiations with the company, to expand their reach.“That’s the beauty of having a distributor like Coors,” Steve explained. “When we were self-distributing, there was only a particular area that we could go to just because it stressed our system.”

With only one van and driver the brewery’s reach didn’t go far, but with the CDC of nearly 400 team members, Bootstrap’s beer will be sold through out Denver and in some mountain towns.

“Because there’s this huge sales team representing us, they can sell so much more,” Steve Kaczeus said. “They’re such a machine that now we have to produce more beer. We’re maxed out in this building, so there’s not any more that we can add in here as far as capacity.”

After many meetings with the CDC and discussions of partnering, the Kaczeus's decided to take the plunge and sign a contract with the company. The couple said they wanted help from Coors because with the current growth they felt stressed in their situation.

“They’re willing to work with what we can give them, knowing we’re going to grow together,” Leslie Kaczeus said. “It’s a great partnership."

The CDC distributes many big name beers such as Boulder Beer, Heineken, Lagunitas, MillerCoors and Sapporo among others. Bootstrap will join the list as one of the smallest breweries to be distributed by Coors. Although the Kaczeus’s are excited about this opportunity for growth, there are some fears that come along with it.

“It’s scary from a sense of it’s more money to buy more capital, and making sure you get everything done right,” Steve Kaczeus said.

Bootstrap will still continue to self distribute to northern areas such as Fort Collins, Loveland, Erie, Frederick and Firestone. However, they’ve been familiarizing themselves with the Denver area for awhile.

“That’s where we’ve spent a lot of time promoting our product and promoting ourselves,” Steve said. “We’ve become fairly well known in that region but there’s so much more—restaurants, hotels, more liquor stores.”

After finalizing their partnership with the CDC, the Kaczeus’s knew they would need to start brewing more beer, which led them to look for a second building. They came across the old Times-Call warehouse, which was recently sold to Red Clay LLC, an entity registered to Oskar Blues Brewery founder Dale Katechis. Craft brewers in Colorado have a long history of cooperation with other brewers, and Red Clay was open to leasing the building to Bootstrap.

The Kaczeus’s brought their request to the Longmont Planning and Zoning commission on Wed., July 20, which decided to allow the couple to open a second brewery and taproom in the old warehouse, located at 142 S. Pratt Parkway in Longmont.

They had to ask the commissioners for a site plan variance, because Longmont law states breweries must be 250 feet away from residentially-zoned neighborhoods. Residents in close proximity to the building were notified of the potential brewery and raised no objections.

“They’re very welcoming to businesses because they’re trying to revitalize that area where we’re moving into,” Steve added.

The couple plans to convert the rented 14,014-square-foot structure into a production brewing facility with a taproom and seating area on an existing patio. This is all part of Kaczeus’s big plan to eventually become a regional brewer.

According to the Brewers Association, a regional brewery has “an annual beer production of between 15,000 and 6,000,000 barrels.” Last year Bootstrap brewed 1,400 barrels and is on track to brew 2,500 barrels this year.

Even though the couple is ecstatic about these new changes, they want to assure the community of Niwot they’re not leaving their current location and Bootstrap will stay the same.

“We are still going to have this place,” Steve said. “This will become more [research and development]; so recipe formulation, small batch brews of some really fun beers, and probably some barrel aging.”

Besides signing with the CDC and opening a second location, Bootstrap will be releasing two new cans of beer in the next year with Coors’ help. The cans will consist of the brewery’s Wreak Havoc Imperial Red and Chillax Pineapple Blonde.

“We’re struggling to keep up with just the two cans that we’re sending to Coors,” Steve said. “And if we’re going to come out with two more cans, we have no more room. With the new place that will give us the opportunity to do that.”

The couple hopes they can open their second brewery by the end of the year, or as soon as possible. Between now and then they will be working even more to meet Coors’ demand of more beer.

“We want them to grow,” Leslie Kaczeus said of their new sales team. “So we want to give them enough to play with.”

Although Steve and Leslie Kaczeus built their business on their own from a financial aspect, they appreciate all the support and help they’ve received from community members and friends over the years.

“We have so many customers and friends who are just cheering us on,” Steve said. “Everybody’s just part of the journey with us. It’s a really fun time in our lives and other people’s lives to see something you created four years ago.”