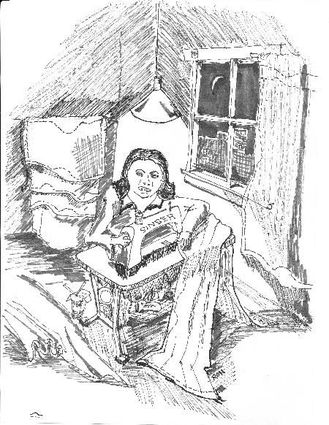 I am not a princess. Really - despite any rumors you’ve heard to the contrary. My problem is that I’m just not a handy person. I don’t sew, decoupage, scrapbook, paint, refurbish or do crafts.

Oh sure, when I was young, during the holiday season, my mother and I would make little things. One year I remember making a kaleidoscope, which consisted of a decal gingerly placed at the bottom of a baby food jar with some glitter. Hey, it was the mid 1950s - that was as high tech as it got.

When things need to be done around the house, I usually let my fingers do the pointing. The recipient of this pointing is the resident Mr. Handy Person, who, for the most part, is handy.

He has repainted the living room, stripped the old kitchen vinyl flooring, reworked the gutter system and lately has been overcome with the desire to tile something.

But when I have an idea and start with those sweet little words, “You know, we might consider, … “ or, “A new (fill in the blank) might look nice,” his usual retort is, “Oh, all you have to do is point your magic wand and you get your way.”

Guess what? He’s half right. I do have a wand. While it doesn’t have a Phoenix feather from Falks, it is filled with a semi-viscous, clear liquid which, when waved, suspends all sorts of red sparkles and glitter in mid air. As for always getting my way… you be the judge.

Last January we installed French doors for the room that passes as my office and our guest room. Since these were glass-paneled doors, and overnight guests might want some privacy, curtains were in order.

I decided to take matters into my own hands, so sans wand and fingers, I would make window coverings. The fact that I do not now, nor have I ever owned a sewing machine was not problem, because my good friend Debbie had one and assured me that making panel curtains was “a piece of cake.”

These curtains would be suspended top and bottom by brass curtain rods, with pleats so tight you could play them like a harp, in a brilliant white, crinkled material. We could whip these puppies up in an evening.

So after measuring twice, so the lady at the fabric shop could cut once, I headed over to Debbie’s content with the knowledge that long before any guests arrived, my windows would be covered.

The first attempt doesn’t really count, since I never made it to Debbie’s. Mr. Handy Person didn’t believe that I was having car problems. The car died in the middle of a busy intersection, at dusk, during the height of rush hour. And yes, it was snowing.

The next sortie didn’t come until Valentine’s Day. While I envisioned a fine afternoon of gossiping and stitching, I never thought that all we would do is continually drive to the fabric shop because, despite my measuring twice, the sales lady didn’t. After my second trip, Debbie and I realized that we were out of time and my drapes wouldn’t see the light of day until the Wearin’ of the Green.

March was the lucky month. In one eight-hour session of pinning something called a shirttail hem, sewing, ripping, re-pinning, re-sewing, an emergency delivery of Chinese food from Mr. Handy Person and many aspirin for a very stiff neck, the curtains were done, even though I had the distinct feeling that I had been sewing in circles.

Due to the events of the next few days, Mr. Handy Person said he couldn’t mount the curtain rods, because the rods came with nails and he wanted to use screws. Why wait, I asked myself when I could do a temporary “fix” with masking tape.

The first set of rods was perfect. And while the pleats were a bit floppy, I knew, when properly screwed in, all would be fine. It was the second panel where the magic failed.

I know why I felt I was sewing in circles. While the top was fine, the bottom looked like the past five years of the NASDAQ. From its starting point, the hem rose rapidly, bell curve style, with an equally dramatic down turn, stopping just below the original starting point. And, just like the gnomes of Wall Street, there wasn’t magic enough in the world to fix it.

Completely befuddled, I did nothing for the next two hours, but leave and re-enter the room, hoping that by some magic all would be right. But it wasn’t, which was too bad, because we had house guests coming.

I’m happy to report that there is a joyous conclusion and all it took was the magic of the Internet. As our guest pointed out, after the third time the tape failed and the curtains et al, came crashing down in the middle of the night, there are companies that sell pre-made panels for French doors. With a point and click and a credit card number, the panels were mine. And it only took the rest of the year for Mr. Handy Person to find the right screws and recharge his cordless drill to install them.

And about those other pesky household projects, painting the deck, restaining the bench that sits by the front door and refinishing the hardwood floors, I am sure that the royal “we” of my index finger, my wand and the right handy person can get the job done. Glitter bomb anyone?