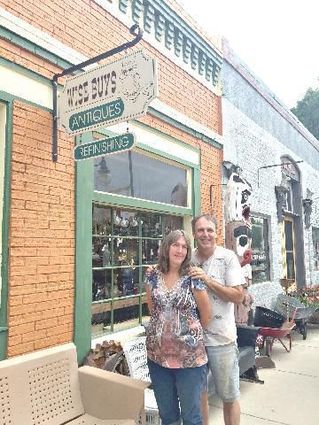 Photo by Aurelia Pollard Tim and Carrie Wise are celebrating the 30th anniversary of their store Wise Buys Antiques, located on Second Avenue in Niwot.

As Wise Buys Antiques in downtown Niwot celebrates its 30th anniversary, owners Tim and Carrie Wise reflected on the ups and downs they’ve experienced over the years.

Wise Buys Antiques opened on July 15, 1986, and was originally located where Little Bird is today on Second Avenue. Prior to opening the store, Tim worked in another local antique store in Niwot for five years, giving him the passion for antiques and restoring them.

“We are very thankful for Jim and Erma Knoch,” Tim said of the owners of the Niwot Antique Emporium. “They were our best buddies. They mentored us in the antiques business and having a business.”

When asked if it was a scary decision to start their own business with no real prior experience, Carrie said, “It was an absolutely scary decision -we had no money. When you’re younger, things aren’t as scary—at least they weren’t for us,” she continued. “You just do it.”

Since opening 30 years ago, the Wises have learned a lot about how to run a business as well as enduring the highs and lows, which was often the cause of the overall economy.

Just before the September 11 attack in 2001, Tim said business had started slowing down, but the terrorist attack made it plummet. They experienced the same downturn in 2008 when the housing market crashed, which caused many business failures.

They also realized that to keep up with other antique stores, they needed to sell more than just furniture. So the Wises expanded their inventory to include smaller antiques such as lamps, tea cups, decanters and other small items.

“Only about 10 years ago did we start to sell small stuff - it used to be just furniture,” Carrie said. “When we became the last antique shop [in Niwot] we needed to have small antiques.”

“Interior decorating styles change,” Tim stated. “People are looking for different things now than when we started our business. Part of doing the small antiques has been catering to that fact.”

“[And] we really try to cater to young people because we want their business,” Carrie added. “We want them to come back and tell their friends.”

Although having their shop in Niwot meant slower months at times, the Wise’s were more focused on having a good life rather than how big they could grow their business.

“It’s been low stress level and a really good community,” Tim said. “There have always been people who were for the town of Niwot, who put time and money into the town.”

Over the course of 30 years, even though the economy has changed and styles come and go, Tim said one thing that’s stayed the same is the feel of the town.

“The community-oriented feel of the town has always been there,” he said. “We’ve always felt that other people were happy we were here when we opened our business.”

Tim and Carrie Wise credit the success of their business to their involvement in the town. From being involved with the Local Improvement District, Niwot Business Association and the Niwot Children’s Park, the Wises have had a hand in many projects.

They try to give that same help and support back to others. As new or potential businesses come into town, the Wises reach out to them to offer help in any way they can. “We try to find out what they’re doing and how we can help them,” Tim explained.

The Wises, who have been married 31 years with two children, Josh (27) and Allie (20), obtain their antiques by either finding them themselves or buying them from people. Carrie said that the Internet made their lives much easier, because they were able to see photos of people’s antiques before driving for hours to see them.

Along with selling antiques, they also offer refinishing and furniture repair services, which is Tim’s area of specialty. “The thing that has helped us all through this time, is that we’ve had a service.” Carrie Wise said.

“We’ve always felt that without both the service and the retail business, we probably wouldn’t have succeeded,” Tim added.

Their belief for succeeding is simple and is just one reason why they’re involved in the town. “If the town succeeds, we succeed,” Carrie stated. “That’s why we’ve been plugged into helping out with different things, like redoing the street, Whistle Stop Park and currently the Children’s Park.”

Even with the downturns they’ve experienced, the Wise’s consider their journey an exciting one, especially witnessing the changes that have occurred in Niwot over the years.

“It has been a lot of ups and downs through the years, but it’s also been really fun,” Carrie said. “When we first got here there was no town park, there were no flowers, there wasn’t anything. To be apart of that whole transition has been really cool.”

Wise Buys Antiques is currently holding an anniversary sale with 30 percent off furniture and 15 percent off everything else, until July 30. The store is located at 190 Second Avenue and they can be reached at 303-652-2888.