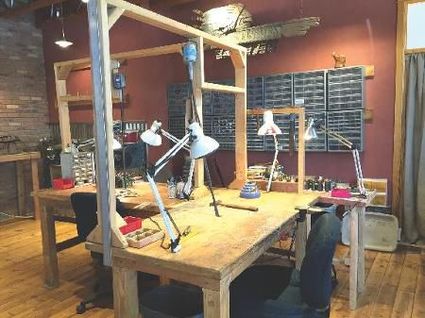 There have been some big changes for Nancy Anderson, who recently moved to Niwot and opened her business, Sweet Bird Studio.

“It was a long crazy ride,” Anderson said of how she got to where she is today.

Anderson, who started out as a financial analyst for the Federal Reserve Bank in Denver, said she fell in love with jewelry making in college and knew she wanted to pursue it as a career.

“I think I lasted about two months before I realized what I wanted to do,” she said of being a financial analyst. “I’m one of the lucky ones that early on I had a clear image of what I wanted to do, and that was to be a jeweler and to work with my hands.”

Although it didn’t come easy at first and Anderson worked various jobs while making jewelry in her basement; her business eventually grew to sell in stores across the country.

“I’d make a few things then take them to stores,” she explained. “One thing led to another and now we sell in over 100 galleries nationwide actively.”

Anderson refers to Sweet Bird Studio as a working studio, where she and other jewelers are actively making various pieces and other art. In addition to jewelry, Anderson also makes unique belt buckles, light fixtures, furniture and even dog collars with a Southwestern flare.

“This won’t be your average store where it’s ready-made and people see it finished and buy it,” Anderson said. “They’re going to meet the jewelers and myself.”

Not only will Anderson sell the jewelry she makes and other pieces of art displayed around the store, but she’s also planning to host workshops.

“In addition to making the work here, I’m also going to be offering workshops and classes—from myself and other talented artists, from around the country and locally. Everything from shrine making, to jewelry making, and collages.”

Anderson settled in Denver after she graduated from college and has called Colorado home ever since. She first started Sweet Bird Studio in 1988 in Boulder, where she had multiple stores. However, the community-feel of Niwot is what brought her to set up shop in the small town.

“I just fell in love with Niwot,” Anderson said. “I’ve been in Boulder for years and we’ve had several stores in Boulder, but what I love about Niwot is the real community feel. I like collaborating with others, and just watching this community grow and thrive is really exciting. It still has such a charm.”

At first, Anderson was told she wouldn’t make a living at making jewelry. She didn’t let that stop her from pursuing her passion, which ultimately has given her stability.

“One thing that has been a certainty in my life has been my profession,” she explained. “I absolutely have never wavered from being an artist. I love it. I’m still elated when I open the mailbox and there are actually checks in the mail for doing this.”

Although there are already a few jewelry stores in Niwot, she isn’t worried that it will affect her shop. “I am of the theory that more is more,” she said. “I don’t see it as a threat so much at all, or I wouldn’t have chosen to move here. We differentiate ourselves by just sticking to what we love doing, which is found object art. I think the work stands out on its own.”

Anderson is excited about her collaboration with There With Care, a local organization that provides support to families and children facing critical illnesses, and the remembrance jewelry she makes for them.

“We do a lot of the remembrance jewelry if a child passes away,” Anderson explained. “That’s probably one of the most heart-felt and exciting things I feel [we do]. Sometimes when words can’t help, a special talisman remembrance like that that someone can wear makes a difference.”

Overall, Anderson hopes she can make an impact in her customers’ lives, including the community of Niwot. “Hopefully whatever you do, you hope that in the end you make a difference in somebody’s life.”

Sweet Bird Studio is planning to hold a grand opening celebration during First Friday Art Walk on Sept. 3. The studio is located at 198 Second Avenue across from Colterra. For more information visit Sweetbirdstudio.com or call 303-440-9891.