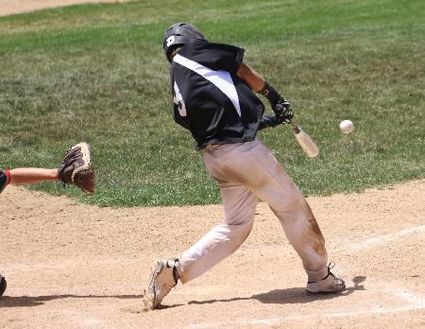 Photo by Ed Navarro Niwot’s Joey Neve makes contact from the left side of the plate in recent Legion B action.

“Since last Thursday, when we lost a pair to Brighton Khaos, we have won four out of five [games],” McBride said. “We are playing at a pretty high level right now, with all phases of the game showing improvement.”

Not only has Niwot developed as a team, but improvements among individual players are evident as well. “Every member of our team has had considerable improvement and our confidence level is going up,” McBride said of the squad.

Caleb Martinez, whose performance on the mound has improved considerably over the course of the season, raised his strike percentage from 57.3 percent in late June to 63.9 percent by July 12.

“In addition to Caleb, Trevor Green is showing good improvement and [we] have had good outings from Dylan Ferrero and Ben Goss,” McBride noted.

Green and Joey Neve have also improved at the plate, with both players achieving a batting average of over .500 during five games in July.

These improvements were on display in a home game against Strasburg on Monday, July 11, with Niwot Legion B gliding to a 9-3 win.

After scoring two runs in the first inning on a single by Green, Niwot remained ahead for the remainder of the game. In his 89 pitches and six innings on the mound, Quinn Williamson helped to secure the team’s win, striking out three and only allowing one earned run.

Niwot’s victory over Strasburg was muted by the injury of Jake Sims (2), who broke his fibula in two places and displaced his ankle bone as he slid into second base during the game. Sims is scheduled for surgery on July 18 and, “is expected to be on his feet in no time,” according to McBride.

“The low point of the week was losing Jake Sims to an injury,” McBride said. “He has been having a great summer, leading our outfield, and had a great [second] half of the summer at the plate, ending his summer with a .348 [batting] average.”

After Sims’ injury, Niwot lost its momentum in its second game against Strasburg, losing 8-6.

Despite an injured teammate and its loss to Strasburg, Niwot went on to win what McBride claimed to be the team’s “best game of the season” on Tuesday, July 12, in a seven-inning game against Boulder.

“We won 8-3 in a game that was close until the seventh inning,” McBride said. “Caleb [Martinez] threw a great five innings with Green coming in and holding the one-run lead.” Combined, the pitchers allowed no earned runs over the course of the game.

“Joey DesEnfants had a great night defensively and Jaryd Meek had one of the best hits of the [game]. Green, Neve, DesEnfants and Colton Goldfarb also had good nights at the plate,” McBride said.

Following Niwot’s victory over Boulder, McBride was optimistic going into the last three league games of the season.

“If we keep playing the way we have been,” McBride said, “we should get into the state tournament and [be able to] compete with any of the teams in the tournament.”

Niwot Legion B went on to win its final two league games against Fossil Ridge, securing its spot in the upcoming state tournament. Even though Niwot had a slow start with it’s first run scored in the top of the fourth, the team won the first game against Fossil Ridge with a final score of 7-5.

In a high-scoring match, Niwot won its final game against Fossil Ridge, 18-13. Despite nine lead changes throughout the game, Niwot’s sixth inning put the team in the lead once and for all with six runs.

At 2:00 p.m. on Thursday, July 21, Niwot will compete in the 2016 Colorado American Legion Baseball State Tournament against the Brighton Bulldogs at Arvada High School. If the team wins, they will play again at 4:30 p.m. and if they lose they will play on Friday, July 22, at 11:30. The tournament will take place from July 21 to July 24 in Arvada.

The Cougars finished in fourth place in the Northern League with a 15-7 record in league games. Following the state tournament, the team will continue practicing through the summer. Spring practices for the high school season will start on February 27, 2017.