Colterra makes changes in the kitchen 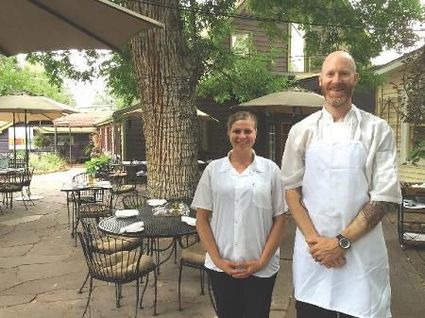 Big changes have been in the works at Colterra Food and Wine, located in downtown Niwot. The French-Italian cuisine inspired restaurant recently announced the departure of its Executive Chef Michael Drazsnzak, and welcome its new executive chef, Erin Robart.

Drazsnzak has been part of the Colterra family for over eight years, seven of which he served as the restaurant’s executive chef. After working in the restaurant industry for nearly four decades, most of which he “focused solely on the kitchen and being a chef,” he’s happy to have spent a portion of that time at Colterra.

“It was a fantastic opportunity with Bradford [Heap],” Drazsnzak said of the restaurant owner. “He was one of the first in the area to really focus on farm to table. And not just making that a focus, but also actively cultivating relationships with the local farmers [and] local gardeners.”

Drazsnzak’s choice to leave doesn’t spawn from another job offer, but from the opportunity to travel with his wife. He’s turning a potential pipe dream into reality as he prepares to travel up and down the Western coast from Mexico to Canada, for a year.

“Travel was the largest impetus of that decision,” Drazsnzak said of why he’s leaving. “I had the idea with my wife about a year ago to travel; to take real, meaningful and significant time to travel. Travel has been a real focus in our life and it’s always been a real objective for time off. An opportunity presented itself for us to do this for real and more long term.”

Drazsnzak and his wife plan to settle in California’s central coast near San Luis Obispo, where they have family and can live near the ocean. As for their trip, they’re not taking much with them as they venture outside their comfort zone.

“It’s a huge step,” Drazsnzak said of his decision. “It took us several months just to decide this is for real, as opposed to just a fantasy. This situation is way out of our comfort zone.”

Although he’s looking forward to his future and potential opportunity in California, Drazsnzak said he’ll miss the relationship he’s formed during his time at Colterra.

“I’ve built a lot of long relationships here between the purveyors, the farmers, [and] the people I’ve had the good fortune of working with,” he said. “I’ve formed a really good relationship with Bradford and Carol. Bradford isn’t just a mentor and chef to me, but he’s a friend. As I leave, I leave with a friend as opposed to just walking out on a boss.”

As for what he plans to do once he’s done traveling and is ready to dive into work again, Drazsnzak said his plan right now is to not have a plan—the opportunities are endless.

“If I stay in the chef world, it probably won’t be in the restaurant setting,” he explained. “That’s one of the life changes I’m looking for out of this.

“I was shocked that [Michael] was leaving,” Owner Bradford Heap said of Drazsnzak. “I didn’t ever think he was going to leave honestly. I’m happy that’s he’s feeling successful and moving on, feeling full of life and is going to go do all sorts of adventures. He’ll always be my friend.”

With Drazsnzak leaving, Colterra set out to find a new head chef and recently hired Robart to join its team. After working at several restaurant jobs in Houston, Texas but not finding the right place, Robart knew she needed a change.

“I was really unhappy with it,” Robart said of her previous job. “[I] talked to my partner about it and he really wanted to get out of Texas, so I just threw my resume out there.”

Robart, who has lived in Denver before, was determined to land the job of executive chef at Colterra. When she was hired, she packed up her car and moved her family to Niwot.

Like Drazsnzak, Robart has also been in the restaurant industry for most her adult life, “whether that’s catering, hotel work, front of the house or back of the house.” Throughout her experiences, her philosophy has always been to cook with love and intention, something she tries to teach all her cooks.

“You can’t be in it for the money in my opinion, you have to be in it for love,” she said of being a chef. “One of the things I talk to my cooks about is cooking with intention. [I tell them] to keep in mind that favorite person they love to cook for, so that every dish they get that energy in there.”

Robart was excited to join Colterra because of its farm to table philosophy, which Robart grew up with. She knew her background would fuse perfectly with the unique restaurant.

“Who I am and the history of my life really fits in with the Colterra philosophy,” Robart explained. “My dad was an organic bison rancher and my mom is an amazing gardener. We used to pick and can our food, we didn’t grocery shop. Farm to table was just how I lived, it wasn’t a life choice.”

Since being in Niwot for only a few weeks, Robart said the main question she gets asked is if she’s going to change the menu. To that question, she has a steady answer of ‘no.’

“The menu will change in the same progression it has always changed,” she said. “As the seasons change there will be tweaks. I’m not reinventing the wheel here. Michael has created something amazing and I’m just going to keep rolling with it.”

Drazsnzak added that the ultimate goal is for Robart to eventually make the menu her own once she finds a firm footing at the restaurant and becomes more familiar with the cuisine.

While Robart is still trying to learn the ways of the restaurant, she said she couldn’t be happier to be in this new position and she’s excited for what’s to come.

“There are so many things in motion right now,” Robart said. “I’m so happy to be here, I feel so blessed to be apart of this community and this restaurant. I can’t even believe it, I’m kind of in shock.”

Heap is looking forward to having Robart on the team, especially after her four course tasting she did to land the job, which Heap said, “was probably the best tasting I’ve had.”

“With Erin, I’m really excited to just have a fresh take on things,” he explained. “It used to be all about how I wanted everything… now it’s different. I’m learning to collaborate more and let the chef make great decisions, and support them in being fantastic.”