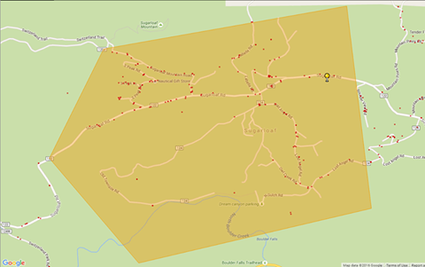 The image above shows the pre-evacuation zone for the Cold Springs fire near Nederland. Anyone in this zone should be prepared to evacuate at any time.

There is a fire ban in place for all of Boulder County. No open burning of any kind is allowed until the ban is rescinded. High fire danger will continue throughout the weekend.

According to the Boulder Office of Emergency Management, a pre-evacuation notice was recently sent to 174 new contacts. Anyone within the pre-evacuation zone should be prepared to leave at any time.

According to the Boulder County Sheriff's Office, two arrests were made on Sunday, July 10 in the Cold Springs fire.

The Boulder County Sheriff's Office released a statement saying, "Sheriff's detectives arrested two men at the Nederland High School evacuation site for their role in the start of the Cold Springs Fire. Jimmy Andrew Suggs, 28, and Zackary Ryan Kuykendall, 26, both of Vinemont, Alabama, have been charged with 4th Degree Arson, a class four felony. The men face a felony arson charge because lives were endangered as a result of the fire."

Both men have been booked and lodged at the Boulder County Jail.