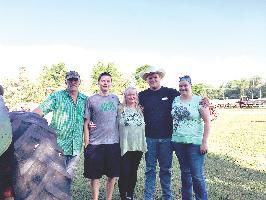 Aurelia Pollard/Left Hand Valley Courier The Slepicka family was nominated by the NCA as the Grand Marshals for the Fourth of July parade. Pictured left to right are Jerry Slepicka, Jessie Slepicka, Marsha Slepicka, Brandon Slepicka and Vanessa Slepicka.

Every year for the July 4 parade, a Grand Marshal is chosen by the Niwot Community Association from nominations. This year’s Grand Marshal isn’t just one person but an entire family that epitomizes the community of Niwot.

The Slepicka family moved to Niwot in 1990, where Jerry and Marsha Slepicka built their own log house. Along with their kids, Vanessa (23), Brandon (20) and Jessie (20), they’ve grown roots in the community and call Niwot home.

Jerry and Marsha Slepicka were both born and raised in Boulder and were brought up with the same values of helping others and giving back to the community. Over the years, they have instilled these same values in their three children, who can’t quite comprehend living any other way.

“When we had kids we asked them what they wanted to do, and that kind of shaped where we went,” Marsha Slepicka said of how they got involved. “They got us into a lot of this, but learning to give back to their community is something we wanted to [teach them].”

The Slepickas are usually involved in every Niwot event in one way or another. They dye hundreds of eggs for the annual Easter Egg Hunt, ride tractors in the Fourth of July parade, they do face painting and tattoos at several events, make popcorn balls for the Christmas parade, and more.

Not only does the family of five participate in Niwot’s events, but they’ve also been involved in all the kids’ extracurricular activities—the biggest one being 4-H. Marsha Slepicka said it’s an honor to be chosen as Niwot’s Grand Marshal, but it doesn’t change what they do for the community.

“It’s an honor, but it’s what we do,” she said. “If there’s something that needs to be done in Niwot that we can do, then we do it. The kids got us into that. It started with 4-H then sports, football, orchestra [and] color guard.”

Marsha Slepicka added that the family never hesitates to help out at a Niwot event, explaining they would often get called to drive their tractors for something, and their answer throughout the years has been the same.

“They’d call us up and ask if we could drive the tractors and it’s always ‘yes,’” she said. “To get recognized is nice but it wouldn’t change what we’ve done for the past 20 years, and will continue to do.”

Vanessa Slepicka, who now lives in LaSalle, Colorado, was very involved in 4-H and fondly remembers all the parades her family has helped with over the years. For her, helping in the community was never a chore but something she looked forward to.

“I remember doing a lot of parades for the fair when we were little, and letting people come and see the tractors,” Vanessa Slepicka explained. “When I joined 4-H, I had to do one community service project each year. We didn’t do just one, we did as many as we could because it was something I wanted to be involved in. It was something that was fun for me to do.”

Her brothers Brandon and Jessie, who are fraternal twins, followed in Vanessa’s footsteps and also joined 4-H. Throughout the years of participating in 4-H and helping at Niwot’s events, they are appreciative of all the experiences they’ve had.

“It was something they instilled in us when we were young,” Brandon Slepicka said on giving back to others. “I remember when I was little and we first got chickens, [then] going and talking to seniors in high school about owning your own business. It made me happy, it made them happy. I just like seeing people smile.”

Jessie Slepicka echoed his brother Brandon and explained his parents instilled in him the value of volunteering saying, “It’s just what I know.”

Brandon currently lives in Niwot and recently graduated from Mesa Community College in Arizona, with a degree in welding technology. Jessie will be entering his senior year at the University of Northern Colorado this fall, and is studying criminal justice.

No matter where the Slepicka kids are in life or what they’re doing, they always make an effort to come home to help in Niwot’s events. Marsha Slepicka knows that in today’s society the focus is usually on oneself, not others. Not only does she teach her kids the importance of giving back, but she also instills the same values in her 4-H kids.

“I kind of believe that as a society we’re getting to be single minded—a ‘what’s in it for me?’ and ‘how much am I going to make?’ [mentality],” Marsha Slepicka said. “I tell every one of the kids in the [4-H] club, and I’ve told my kids, ‘I want you to always think about what you can do for your community without expecting anything in return.’”

Jerry and Marsha Slepicka have been the organizational leaders of the Niwot Nifties 4-H club for 13 years. Jerry explained that being involved in many community organizations and events, whether for his kids or to help others, has been the only way of life he’s known.

“Neighbors will come over here all the time and ask me to do something for them, then offer to pay,” he explained. “I always tell them ‘no, that’s what neighbors are for.’ I was raised in the rural part of Boulder and the neighbors were everything. Everybody helped everybody else. It’s still my belief today.”

It’s easy to spot the Slepickas’ log home in Niwot with all the colorful tractors in the front yard, which Jerry Slepicka explained are what got them immersed into the community.

Jerry and Marsha started with just one tractor they bought to mow the weeds, but acquired another from Jerry’s family. Once they had multiple tractors in the yard, people would stop by and offer them an antique tractor to add to their collection.

Pat Murphy, of Niwot Real Estate, puts on many events around town including the Easter Egg Hunt and the Fourth of July parade. She’s grateful for all the times the Slepicka family has been there to help her, and she doesn’t even have to ask.

“Their family has helped me in so many events in Niwot for many, many years,” Murphy said of the Slepicka family. “They’re the 4-H leaders and for every event (the Easter Egg Hunt, Nostalgia Days, Fourth of July now) they do face painting. You just rely on them. You don’t even have to call, they just show up.”

The Slepickas don’t help others to earn awards or accolades, they truly do it out of the goodness of their hearts. Vanessa Slepicka knows that giving back is the best way to become part of a community; it’s what shapes a town.

“It brings you into being a part of the community if you give back to it,” Vanessa Slepicka said of volunteering. “People want to help you just as you want to help them. It’s a nice feeling to give back to something you’re apart of.”