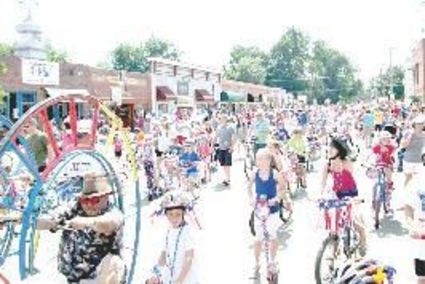 Photo Courtesy of Niwot Community Association The annual Fourth of July parade will take place on Monday, July 4, starting with a pancake breakfast at 7:30 a.m. and ending with the parade at 11 a.m.

The Fourth of July is a special time in Niwot because it not only celebrates America’s freedom, but does so with the only parade in Boulder County for the holiday.

Julie Breyer, third-grade teacher at Niwot Elementary School, is part of the Niwot Community Association (NCA) and has been the chair of the parade for the past three years. This will be the NCA’s fourth year orchestrating the parade (that will take place on Monday, July 4), although the parade has been around for many years. Breyer said the parade is a great event for families.

There will be the usual pancake breakfast that many look forward to, and this year’s proceeds will be going to MaryJo Wysoki, a familiar face to Winot Coffee fans, who is battling cancer. Wysoki was supposed to receive the proceeds from the Easter egg hunt’s pancake breakfast, but since that was canceled the community still wanted to donate to Wysoki.

“The parade itself is a completely free event and we have the pancake breakfast,” Breyer explained. “The proceeds from the pancake breakfast this year are going to MaryJo. She’s still in need of some backup funds and has managed Winot Coffee since it opened. The community support has been phenomenal.”

Wysoki has been involved in the Niwot community for many years and Breyer said giving her these proceeds is the least the community can do. She knows Wysoki doesn’t take these donations for granted, and is thankful for the community’s support.

“I know she’s very appreciative and grateful for everything the community has given her,” Breyer said. “She’s an amazing person and is really hoping to get back in [Winot Coffee] as soon as she can.”

The NCA also gives donations to various kid’s organizations around town, and this year’s recipients are the Niwot High School cheerleaders, band and football team. The three groups will be volunteering in various ways during the event.

“We give a donation to the [Niwot] cheerleaders and band, and the football team works with Big Tom at Abo’s to make money selling water,” Breyer said. “We open up as many opportunities as possible to local groups.”

This year, the cheerleaders will be overseeing the bike decorations and have already organized all the decorations into packets for nearly 100 kids who ride their bikes in the parade. They will be there to help the kids decorate their bikes and make sure everything runs smoothly, which hasn’t always been the case in previous years.

“The bike decorations have been a little bit of a learning experience,” Breyer explained. “The first year we just put stuff out there and there weren’t any rules. So we learned about that. The second year Cindy [Butler] put out packets that have cards and clothespins, streamers, pinwheels and all kinds of stuff.”

Breyer hasn’t put together this event all on her own though. She recognized the other members of parade committee, which includes Kathy Koehler, who Breyer describes as her co-chair, Pat Murphy, who organizes the pancake breakfast, and Butler, who assists with the bike decorating, among the many other volunteers who make the event possible.

“It’s a pretty well-oiled machine at this point, but we have new stuff every year,” Breyer said of the event.

At the pancake breakfast this year, a presentation of a walking stick will be made to a veteran. The walking stick was crafted and donated by John Barnett, who approached the NCA and told them he would like to donate one of his walking sticks. Barnett has donated over 350 walking sticks to veterans over the last 10 years.

“We’re going to make a presentation to a veteran this year with the walking stick,” Breyer explained. “[Barnett] finds fallen aspen tree branches, cuts them to the right size, sits in the sun and uses a magnifying glass to burn designs into these walking sticks, then donates them to veterans at different events.”

People are able to nominate a veteran at the NCA’s website, Niwot.org, and the NCA will choose a veteran from the nominations.

After the morning festivities, the parade will begin at 11 a.m. and head west on 2nd Avenue. Although people are encouraged to sign up to walk in the parade ahead of time, Breyer said, “We just let them in the lineup. If you show up the morning of the parade, we’ll let you in.”

The event-filled morning is pretty fluid; there’s not a firm schedule for the events. The pancake breakfast will begin at 7:30 a.m., bike decorating will begin at 8:30 a.m., and the Niwot Semi-Marching Free Grange Band will play a concert from 9-10 a.m. The parade lineup will begin at 10:30 a.m. with the parade starting promptly at 11 a.m.

Breyer said with all the events happening throughout the morning, her hope is that the parade festivities create lasting memories of small-town life for those who come.

“Our goal is that it represents small town America,” Breyer said of the parade, “that it’s family friendly, that it’s fun, and that there’s something for everybody to [do]... This is what small town America looks like. It still exists and it exists in our families, in our children and in our friends.”

Breyer pointed out that the Fourth of July isn’t just an excuse to have a fun parade in town, but to recognize the country we live in and the opportunities available to those who call America home.

“For me personally, I would hope people walk away feeling patriotic,” she said, “that they would walk away feeling that we live in a pretty amazing country. We have opportunities that a lot of other people don’t have, and I would like people to walk away with just that feeling of family and freedom.”