5th Annual Why Not Niwot? 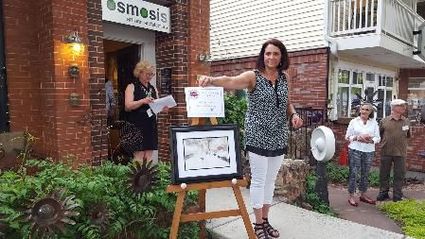 Photo by Karen Copperberg Michelle Henzel displays Michael Hassett’s winner of the People’s Choice Award, “Silent in the Morning” with Ann Postle over her right shoulder, and Mary Williams on the right.

On June’s first Friday of the month, Osmosis Gallery and the Niwot Cultural Arts Association hosted the winners of this year’s art show. Emceed by Biff Warren of NCAA, and Anne Postle and Michelle Henzel, also of NCAA and Osmosis Gallery, announced the winners of this fifth season. Twenty entries in all were submitted, with the only requirement being it needed to represent Niwot in some way. According to Osmosis Gallery owner Anne Postle, by the time Friday’s winner was revealed, 6 of the 20 entries had been sold.

First place in the People’s Choice Award went to Michael Hassett, along with a $100 cash award. Second place went to Susan Soklin, for her art entitled “My Mom’s Pie”.

The Juried Art was judged by Mary Williams, owner of Mary Williams Fine Art in Boulder, a judge for the 4th year; Alyson Bell of Tool Studios, and Susan Cloar, owner/manager of Niwot Interiors.

In third place with a $100 prize for the Juried Art was Doug Cole, for his “Vintage Niwot Sign.” In second place, Michael Hassett earned $250 for “Back on the Train” (who also won first place in the People’s Choice Award), and the Grand Prize of $500 went to Kathleen Reilly for her “2nd Avenue View.” 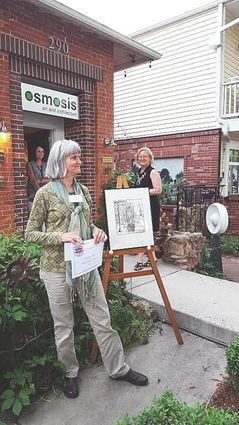 Photo by Karen Copperberg Kathleen Reilly accepts the Grand Prize for her “2nd Avenue View” in front of Osmosis Galley Friday night, as Ann Postle and Michelle Henzel look on.

Anne Postle explained that even though Reilly had won first place last year, her picture this year was so totally different than last year’s, you would never know they were by the same artist.

The seven member NCAA board was thanked by emcee Biff Warren. He, along with the rest of the board, Michelle Henzel, Anne Postle, Vicki Maurer, Satir DeMarco, Alyson Bell, and Holly Saia, sponsors First Friday Art Walks, the Niwot summer concerts Rock ‘n Rails, the Children’s Park, and Let’s Wine About Winter.

At First Friday’s event, donations to NCAA general funds came with bottles of wine with the label representing K. Reilly’s linoleum block art, “2nd Avenue View,” signed by the artist, with all proceeds going to the Niwot Children’s Park.

Notecards are also available with the print. Niwot Liquor store will also have the red or white wine available for sale with that label.