Roadwork on Diagonal to continue 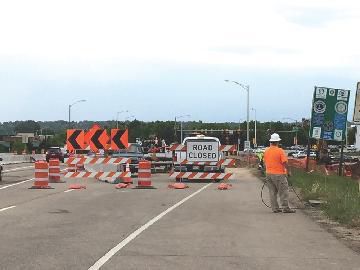 Photo by Aurelia Pollard Crews will be working throughout the summer on a 10-mile stretch of Diagonal Road west of Longmont to improve traffic flow. The project is expected to be complete by October.

The Colorado Department of Transportation began work earlier this month on SH 119, or Diagonal Highway, in between Longmont and Niwot.

Last week they began milling the asphalt on the roughly 10-mile stretch of road that will be resurfaced.

According to CDOT Communication Manager Jared Fiel, the work should be completed by October at a cost of $12 million.

In addition to resurfacing work, guardrails and bridge rails will be replaced, and minor bridge repairs will be performed and signs replaced along the construction zone.

During the project, crews will work to minimize any traffic impacts, he said. Lanes shifts and lane closures may occur and will be directed by flaggers at both ends of the work zone.

“A reminder with all of the lane closures required for this work, there is a lot of merging needed,” Fiel said. “People need to think of the merge as a zipper. If both lanes of traffic continue all the way to the merge point and then ‘zip’ in one from each side, the merge happens a lot quicker for everyone.

“Often times people think they should get over in the through-lane as soon as they see a merge coming up and then get mad at others for continuing to the merge point and not letting them in. This slows down everyone and increases blood pressure. Take it easy and zip it up.”

“As a reminder, simply because workers are not readily or easily seen does not necessarily mean they are not present,” Lewis said. “Anyone driving in or near a work zone of any size should take extra caution and be aware that people or equipment may appear suddenly. Remember, these workers are people and have families that want them to come home at the end of the their work day.”

Fiel added that there is work going on in the area often.

“We have had work going on in that area all the time,” Fiel said. “Some of the work is very localized, meaning we may be doing work on a bridge underneath and people driving by may not see it.”

He wanted to remind motorists to use caution in all work zones.

“This summer, we have many crews out on our roads,” Fiel said. “These folks are out there working hard to improve our roads, so please give them a brake and slow down in the cone zones.”