Niwot Children's Park expected to open by end of summer 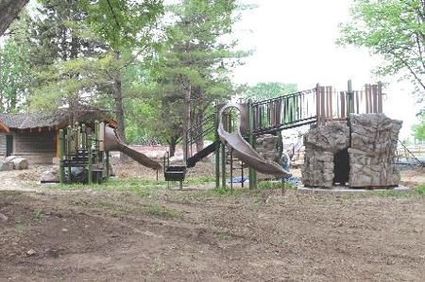 Photo by Ashley Weibel The Niwot Children’s Park is expected to open by the end of summer and has currently raised over 90 percent of its overall goal of $500,000.

After over three years of planning, fundraising and constructing, the Niwot Children’s Park is finally nearing completion. Members of the building committee estimate that the park will be open by September 1, if not sooner. The park is located on the corner of Murray Street and First Avenue, across from Whistle Stop Park.

The concept for the park was first formed by Jeff and Cynthia Lambert, who purchased the property at 101 First Avenue in Niwot before proposing the creation of a new children’s park to the Niwot Cultural Arts Association (NCAA). The NCAA applied for, and later received, a grant of $140,000 from Great Outdoors Colorado to Boulder County. With the help of funds raised by the Niwot community, on July 17, 2013 the property was purchased as the location for the children’s park.

At the onset of the project, the building committee made a $500,000 fundraising goal. With current funds at $459,098, 92 percent of the goal has already been met thanks to the contributions of 154 residents, families and local businesses. Bruce Warren, president of the NCAA and member of the park’s building committee, is optimistic that the remaining funds will be raised soon.

“The community continues to step up and donate funds,” Warren said. “For people who would like to contribute, donors of $100 or more will be included on a permanent plaque in the park. There are also opportunities to sponsor particular benches or play structures for significantly larger donations – ranging from $1,000 to $8,000.”

Fundraising events, such as the Niwot Rotary Club’s recent Wine, Cheese, and Chocolate Tasting, which took place earlier in May, are continuing to raise money. In the coming months, additional fundraising events are expected to help the park fulfill its $500,000 goal.

“We are hoping to put on a fundraiser this summer in conjunction with the release of the movie ‘Dear Eleanor,’ which was filmed in Niwot,” Warren said.

Though snowstorms in April caused some considerable delays, construction is now “moving right along” and is nearing its final stretch. “There are a lot of things that are coming together,” Warren stated.

One of the difficulties in planning and constructing a children’s park from the ground up, are the many contractors who all have to be scheduled around one another.

“People don’t quite realize how many different contractors are involved,” Warren explained. “Anywhere from plumbers, to earth movers, to stone masons, to wood carvers, [to] electricians, and that’s just to name a few.”

Fortunately, many of these people have been generous with their labor.

“A lot of them are volunteering their time or discounting the cost significantly,” Warren added, “We just ordered a carving of an owl out of wood, and the cost will be discounted by a third of what the normal price would be.”

In order to receive lottery funds from Great Outdoors Colorado, the NCAA was required to put the park under the ownership of the government. For this reason, the NCAA partnered with Boulder County.

“Boulder County has been good to work with, but the process just takes a while,” Warren said. “You have to have inspections when different stages of construction are done.”

However, Niwot will likely be able to eventually buy the park back from Boulder County.

“The [NCAA] has an agreement with Boulder County to develop the park and we have a lease for $1 a year for 25 years,” Warren explained. “At the end of the 25 years, we have the opportunity to purchase the park for a dollar. That is what will likely happen.”

Through the lengthy process of planning, designing and constructing, several community members have been invaluable to the realization of the Niwot Children’s Park.

“Tim Wise, Jim and Chad Fletemeyer, and Crystal Wise have all been wonderful, and have donated hundreds of hours of time and effort to the park’s design and construction,” Warren said. “We’ve also been fortunate [to have] Dale Turrell as the general contractor for the restroom and pavilion. He’s done a great job for us.”