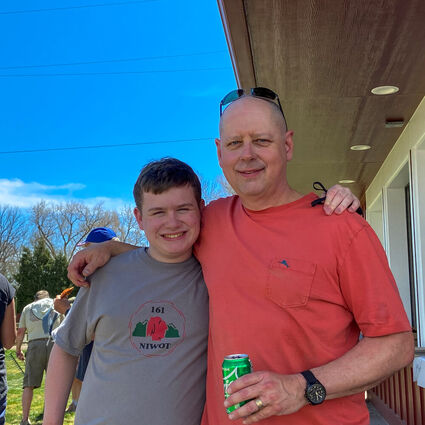 Jason Champion (left) completed his Eagle Scout project at Whistle Stop Park May 1, with the assistance of his father, Jay Champion.

Jason Champion has spent many nights at Niwot's Rock & Rails summer concert series, volunteering as a Gargoyle for several years, one of the many youths who sit on top of the bins and supervise the compost and recycle deposits at the popular event.

Now a sophomore at Niwot High School, Champion was looking for an Eagle Scout project in the Niwot community, and Whistle Stop Park was a natural fit. Jason and his father, Jay Champion, contacted the Niwot Cultural Arts Association (NCAA), owner of the park, and volunteered to improve the park as part of Jason's Eagle Scout project.

A plan was prepared, approved by the scout troop leaders, and the project quickly came together. The park has a new building, known as The Depot, which was completed just as the pandemic wiped out the 2020 concert season. The Depot was constructed to serve as a concession building as well as a storage facility for the beer trailer and the band trailer. Though the building is complete, it was in need of shelving for storage, and the disturbed area surrounding the building was in need of landscaping.

Jason Champion made it his project to lay about 4,300 square feet of sod in the southern part of the park, which will require periodic watering to get established. With help from his father, he arranged to obtain the sod from Sunny Slope Sod Farm in Longmont at a deep discount.

He also took on the responsibility to see that the new building has the shelving it needs on the walls. Additionally, his crew helped clean out the caboose at the park and move many items from storage into the new building, with assistance from the NCAA's Satir DeMarco, who has been the booking agent for the concert series since its inception in 2006.

The sod-laying party took place Saturday, May 1 at 10 a.m. Champion organized a crew of 35 Scouts, including a few parents and scoutmaster Bill Dickhans, who came to help him complete his Eagle Scout project.

The scouts began laying the sod around 10:30 a.m., and finished before noon, an hour ahead of schedule. Water to help get the sod established was made available by Vern & Robbie Vinson, who live next door to the park. Champion will be responsible for monitoring the water to make sure the grass takes hold before the first Rock & Rails summer concert on June 3.

Champion is a member of Boy Scouts of America Troop 161, which is sponsored by the Left Hand Grange of Niwot. He thanked the Scouts and parents after the work was complete, providing pizza from Abo's Pizza and soft drinks to the hungry crew. "My Eagle Scout project wasn't just for me or for Rock & Rails," he said after the work was done. "This project was for Niwot and to give back to the community that has given so much to me." 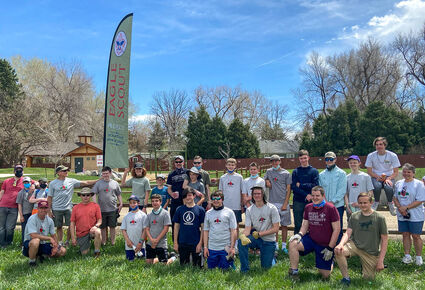 Jason Champion and his crew of Boy Scouts installed 4,300 square feet of sod at Niwot's Whistle Stop Park on May 1 as part of his Eagle Scout project.

Ever the Gargoyle, Champion arranged for composting and recycling of what would have otherwise gone into the trash from the project. Many lost and found items collected over the years from the popular concert series were donated to a local charity. T-shirts and banners from Rock & Rails of years past will be available to concert patrons this summer for a donation to offset concert expenses.

Funding for the project was provided through donations Champion arranged, as well as the Whistle Stop Park fund maintained by the NCAA.