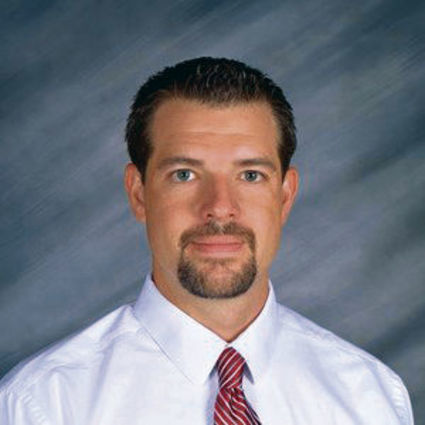 A replacement for the replacement. Longtime Roosevelt teacher and athletic director Joe Brown has been named Niwot’s new AP/AD, after Kevin Clark accepted an offer to stay with Thompson Valley Schools.

Niwot High principal Eric Rauschkolb wasn’t expecting to need a second replacement for Chase McBride, but putative hire Kevin Clark got an offer he couldn’t refuse. Earlier this month, the former Loveland High administrator announced that he will be assuming the role of full-time district athletic director for the Thompson Valley Schools, a move that allows him to stay in the town he and his family have called home for more than a decade.

That left Rauschkolb with an empty spot on the 2019-20 roster, and he didn’t waste much time filling it. On June 14, he announced Roosevelt High administrator Joe Brown as the new Assistant Principal and Athletic Director at Niwot.

“When this opened up, he was our first thought,” Rauschkolb said of Brown, who has been the Rough Riders’ activities and athletic director since 2016, and was a finalist for the Niwot position back in February. “We respect him highly, and we think he’s fantastic.”

Brown received his undergraduate degree at UNC and joined the staff at Roosevelt High in Johnstown as a social studies teacher and assistant track coach. He later served as both an assistant and the head coach of the Rough Riders’ boys basketball program.

Brown was named Roosevelt’s athletic director in 2016, and presided over numerous Tri-Valley League athletic championships, notably in track & field, girls cross country, and cheer. Roosevelt also captured six individual state championships in track & field during his tenure,  most recently in both girls shot put and discus in 2019. During his final year, he helped to implement a Unified basketball team for special needs students, and coached them to victory over the Johnstown police at the end of the season.

“It was just a tremendous experience for me,” Brown said of his time at Roosevelt. “I was very blessed to coach some great kids and work with some great kids, and staff members and coaches, and it was just a wonderful opportunity for me the last several years, but when a great job like Niwot comes open, and there’s an opportunity to take that next step, it’s too good to pass up.”

Brown said he is looking forward to being a “servant-leader” for a school that offers both competitive athletics and competitive academics. He is new to the IB program, but said he was impressed by the new avenues it opens for student involvement.

“What I’m excited about at Niwot is how many different opportunities there are for kids there with different clubs and activities. If you have a niche interest, Niwot has something for you, and that’s just awesome. I think that the more we can have kids involved in high school, the better, so I’m continuing to push so that kids can find an opportunity to be successful and be a multi-sport athlete and be involved with activities, and be well-rounded.  That was one of our big missions at Roosevelt that helped us be successful in so many different areas, and I know Chase and Eric have worked hard to foster that kind of environment too.”

Brown’s hire is still awaiting final approval from the St. Vrain Valley School board, but he’s spent the last few weeks at Niwot “in the process of getting to know people and trying to get the lay of the land.” He said he plans to remain “observant and supportive” during his first months on the job, and doesn’t foresee any major changes in coaching or policies, mostly because everything seems to be working well as is. Mostly, he just wants to make sure that everyone else is as enthusiastic about his new school home as he is.

“What I can do is let the coaches do what they do best, and let the kids continue to develop. One of my strengths is that I am a die-hard supporter of athletics, and I think I bring that passion and energy to really promote Niwot and promote the great endeavors of these kids and teams, and to really get that out there and show the rest of the state what a great place Niwot is and how incredibly gifted this group of people is.”