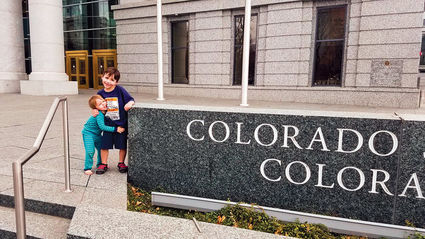 Gunbarrel resident Kristin Bjornsen brought along two trusted assistants when she filed her notice of appeal with the Colorado Court of Appeals.

Government officials in Colorado will have to be more transparent about closed-door executive sessions and other internal communications after the Colorado Court of Appeals ruled that Boulder County violated the state's sunshine laws during the debate over development of the Twin Lakes Open Space.

In a published opinion released in April, the appellate court reversed key portions of two rulings made by Boulder District Court Judge Thomas Mulvahill against Gunbarrel resident Kristin Bjornsen, who sued the Board of Commissioners and Boulder County Housing Authority in February 2017 alleging breaches of both the Colorado Open Records Act (CORA) and Open Meetings Law (COML).

In finding for Bjornsen, a three-member panel headed by Judge Karen Ashby ruled that the commissioners' practice of convening "emergency" executive sessions and then notifying the public retroactively was a violation of the COML, which requires such closed-door meetings to be announced beforehand. The appellate court further found that the county violated CORA by misapplying "work product" exemptions to certain internal documents related to Twin Lakes and withholding them from public scrutiny. Those documents, as well as some others that the court ruled were improperly redacted, were ordered to be released by the county right away.

To say this was welcome news for Bjornsen would be a bit of an understatement.

"I felt joyful and grateful," she wrote in an email interview of her reaction to the appellate ruling. "My kids and I were in the grocery store parking lot on Divine Mercy Sunday, one week after Easter. It was about seven months after I filed my last brief with the Court of Appeals. Suddenly I got a message from an attorney with the Colorado Freedom of Information Coalition, letting me know I'd won and congratulating me on the victory. My eyes got really wide, and we started jumping up and down in celebration."

Bjornsen can be forgiven for celebrating. For nearly two years, the determined mother of two sparred largely on her own against the county's legal professionals, armed only with advice from the Colorado Freedom of Information Coalition and her own sense that county officials had something to hide. That meant some awkward moments before Judge Mulvahill, who granted a summary judgment for the county in the fall of 2017. Boulder County then unsuccessfully sued Bjornsen to recover approximate $4,000 in attorney's fees and court costs, a move she called, "terribly stressful."

"In the county's motion for attorney's fees, they said that the county hasn't sought attorney's fees in at least 10 years, but they were seeking them now to 'discourage' cases like this. I was really gobsmacked by that. I thought, 'Really? You want to discourage freedom of information?'."

Bjornsen said she was "a bit despondent" after the district court trial, but her family, friends and faith "gave me strength and kept me going." She appealed Mulvahill's ruling in the spring of 2018, and then patiently waited for more than a year for the appellate court's decision. When it finally came, Bjornsen wrote that she felt "as if a light had been shined on a very murky situation."

"I was surprised at how efficiently the judges cut through the baloney. In one way, the legal issues were simple and straightforward, but in another way, they were horribly complex, because such a web of words had been woven around them-the court documents filled binders and binders."

Ironically, she now sees her loss in Judge Mulvahill's courtroom as a blessing in disguise.

While Bjornsen is pleased with the outcome of her suit, she remains troubled by the conduct of county officials, who, she contends, misled the public and wrongfully used taxpayer money during the Twin Lakes dispute, as revealed by the unredacted documents.

"I used to automatically trust local government," she wrote. "Although I'm still grateful to the many wonderful people who work for our county and the valuable things they do, I was absolutely astonished by the secrecy, false information, stratagems, and other shenanigans that some officials have used to try to push this development through at the Twin Lakes. To quote Thomas Jefferson, 'Experience hath shewn, that even under the best forms of government those entrusted with power have, in time, and by slow operations, perverted it into tyranny."

In the days following the appeals court ruling, Boulder County advised Bjornsen that the commissioners have stopped holding "emergency" executive sessions. The county is now seeking to have the suit dismissed, but has agreed to discuss settlement options with Bjornsen, which is what she has wanted all along.

"I want the county to adopt a formal policy stating that they will abide by the Open Meetings and Open Records laws, so other citizens don't have to face this same battle again."

Bjornsen herself is not done with battles, however. With the CORA suit winding down, Bjornsen said she plans to turn her attention back to the Twin Lakes Action Group, which is currently embroiled in a lawsuit with Boulder County over taxpayer funds raised by the Gunbarrel Public Improvement District. It will be heard at the Colorado Supreme Court later this year. 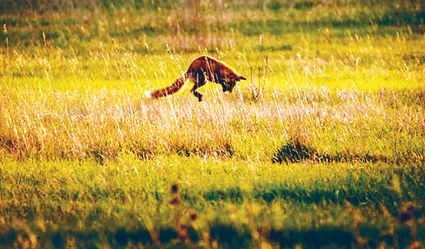 A fox hunts in the Twin Lakes Open Space, which is one of the last remaining wildlife corridors in the area.

TLAG is also anticipating a new annexation effort by the county or even a renewed push for a change to the site's land-use designation, even though that failed two years ago. However, with new procedural rules have diluted the power of the county planning commission, which rejected the proposed change in 2017. According to Bjornsen, there is more than enough room for compromise.

"The fields are the last remaining wildlife corridor between the Twin Lakes and Walden Ponds and an important upland grass habitat for the Twin Lakes wildlife. Gunbarrel and Boulder citizens have attended numerous public meetings to advocate that the residential units, which would thankfully be affordable housing, be more integrated and dispersed and built closer to public transportation, stores, and services. The community has offered the county better, alternative sites for the development and asked for the fields to be protected, so we can achieve a win-win."

For more information about the Twin Lakes Action Group and its ongoing efforts to protect open space in Gunbarrel, visit http://www.tlag.org.