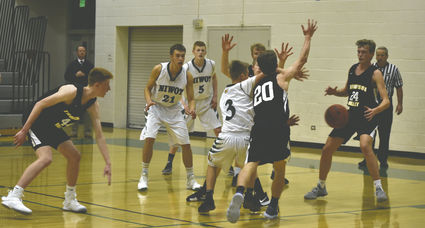 Niwot senior Alex Erickson (3) loses the ball under the basket against Thompson Valley on Jan. 30.

The road through the Northern Conference has been bumpy for the Niwot boys basketball team as of late, so head coach Eric Hejl was more relieved than anything after his team held on for a 58-55 victory at home over Thompson Valley on Jan. 30.

“I don’t know if we could have handled another close loss,” he said. The night before, Niwot fell to Northridge 63-58 in overtime, and on Jan. 25, the Cougars fell 70-69 to Mountain View, despite a 46-point night from senior guard Thomas Bounds. “We’re really at that point where too many close losses start to really wear on you.”

Niwot’s win snapped a seven-game skid that started back when these two teams met in Loveland on Jan. 9. In that game, Thompson Valley outhustled the Cougars on both sides of the ball and handed them a stinging 61-35 loss. Since then, Niwot has played inconsistently at best.

Game two against Thompson Valley started out in alarming fashion, just like its predecessor, with Niwot unable to score or stop the Eagles. The Cougars found themselves down 8-2 early in the first quarter, but two quick baskets by junior Milo Ostwald seem to shock them back into action. Niwot went on to outscore the Eagles 20-16, and by halftime, trailed only 24-22. Afterwards, Ostwald said the Cougar offense had been far more successful inside the second time around against Thompson Valley.

“I feel like during the first game we were a little afraid of contact inside and kind of shying away from it,” the forward said. He ended the night with a season-high nine points, along with four rebounds and a steal. “In this game, we really took advantage of home court, and gave it everything we had.”

Led by Ostwald and Bounds with a combined 11 points, the Cougars slowly assumed control of the game in the third quarter, and held a six-point lead heading into the fourth. Bounds added another nine points in the final eight minutes, and the defense withstood a last-minute onslaught to deliver the long-awaited win.

“They made some really hard shots in the last minute to make it a game,” Hejl said. “But we made the free throws that we needed to make, and we got the stops we needed to get, and kept our composure, and that’s what we’ve been preaching to them. It was a full team win. We got contributions from everybody; even the guys who didn’t play were up and excited on the bench, and we just kept grinding it out.”

The Cougars went 21-for-48 from the field (44%) and 13-for-15 at the line. However, they turned the ball over just 11 times, down from 21 times in the first meeting with the Eagles. Though it wasn’t their best game, statistics-wise, Hejl said he thought it was impressive for other reasons.

“To get one like this and come and be resilient and compete and actually come out on top against a team that beat you earlier in the year, that shows a lot of character on these guys’ part, and I challenged them before the game to come out and play with heart, and I thought they played with heart, so I’m proud of them.” 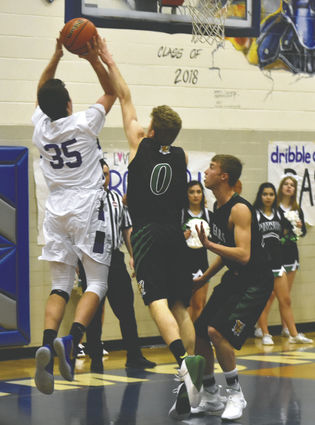 Bounds led all scorers with 23 points, and now has 305 points on the season, fourth highest in the Northern League. His astounding 46 points against Mountain View was later described by Ostwald as “the greatest thing I’ve ever seen.”

Unfortunately, the win over the Eagles didn’t give the Cougars much momentum against top-ranked Longmont two nights later. The fearsome Trojans barely even broke a sweat in the 89-34 point blowout, which ended with a running clock.

Niwot fell to 8-11 on the year with four games remaining, and only a dim path to the post-season. The team will celebrate Senior night at home on Feb. 7 against Silver Creek. During halftime of that game, Commissioner Rhonda Blanford-Green will formally announce the selection of Niwot girls basketball coach Terri Ward to the CHSAA Hall of Fame.