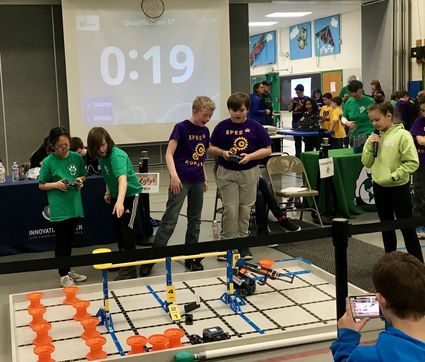 Twenty four teams from NES, Fall River Elementary School (Longmont), Eagle Crest Elementary (Longmont), Estes Park Elementary, and Hygiene Elementary schools worked on problem solving and innovation so that robots could successfully tackle their tasks. The all-day event was a collaborative experience with staff and volunteers from NES, along with students from Sunset Middle School and Niwot High School helping to ensure the tournament ran efficiently.

Working on a four by eight-foot gridded board, robots need to relocate five-inch high plastic “hubs” to specific locations on the field in 60 and 30 second increments. Teams work collectively and were pared down as the matches are played.

There were awards given in various categories including teamwork and robotic skills. Estes Park Elementary and Fall River Elementary schools earned awards which now allow them to move on to the state competition in March.

NES’s head custodian Ron Gehringer won the Volunteer of the Year award for his work in putting the event together.

Following the event, NES Principal Nancy Pitz wrote on Facebook, “I’m proud that we took on the challenge to host our first tournament and it was a huge success.”

NES’s Robotics Club Coach and Discovery Lab teacher, Matt Moore-Kochlacs (Coach MK), reported there was an even spread of awards over all of the participating schools.

Highlights of the day according to Coach MK included teams from different schools collaborating together to maximize the results of each match, each team improving their communication skills and strategies as the day progressed, and many moments of support amongst teams when robots failed or needed rebuilding.

Coach MK added, “It was also beautiful to see the parents pull together at the end to break down the equipment and chairs. By the end it felt as if a community had developed!”