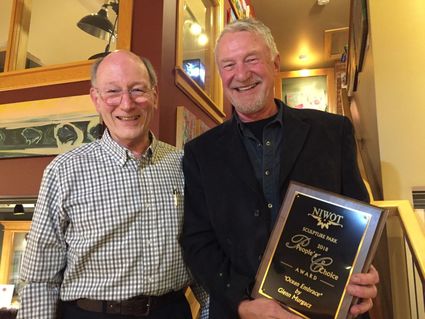 Chuck Klueber (left), chair of the Sculpture Park Committee for Community Corner, presented a plaque and a check for $250 to artist Glenn Murgacz, winner of the People’s Choice Award for his sculpture, “Ocean’s Embrace.” Several members of the committee, including Anne Postle, Laura Skaggs, Scott Deemer and Catherine McHale, were present at Osmosis Art and Architecture for the First Friday Art Walk presentation by the Niwot Cultural Arts Association. “We got 70 votes by members of the public,” Postle said, “which I thought was pretty good.” Murgacz’s creation was selected by 27 percent of the voters, who chose from among nine sculptures installed at the corner of 79th Street and Niwot Road last fall. Murgacz, who has been pursuing his passion since the 1990s after 32 years working in research for Exxon, created the piece in early 2018. “I do some work on commission, but most of the time, I do art for art’s sake,” Murgacz said. The northwest Longmont resident moved to Colorado a year ago to be closer to his grandchildren. He first found out that he had won the award when his neighbor congratulated him. “I didn’t know I had won,” Murgacz said, “but my neighbor saw it in the Left Hand Valley Courier and showed it to me.” He was especially pleased that the voters appreciated his art. “No one I know voted for me,” he said, explaining that even he did not vote for his own art. “The art spoke for itself.”