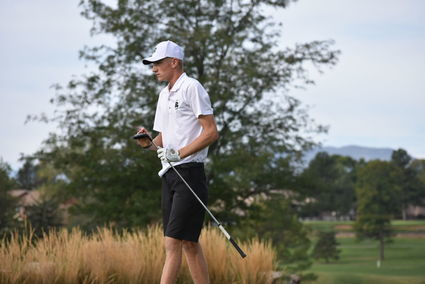 Senior Jack Hoover walks off the tee box during the Class 4A Region 3 tournament at the Olde Course on Sept. 19. Hoover finished in a four-way tie for eighth place, and qualified for state for the third consecutive year.

Niwot head golf coach Ed Weaver wouldn’t say he was disappointed in his team’s performance at the Class 4A Region 3 tournament on Sept. 19, but it wasn’t the outcome he expected either. Bedeviled by unpredictable greens and a treacherous back nine at Loveland’s Olde Course, the Cougars finished in fourth place overall, and missed qualifying as a team for the Class 4A championship tournament for the first time since 2015.

“The reality is, as a player, unless you’re trying to win the tournament, you’re just playing to get in,” Weaver said. “Unfortunately, we just played too conservatively.”

It wasn’t all bad news for the Cougars, however. Seniors Jack Hoover and Andrew Elliott are headed back to the state tournament, which is slated for Oct. 1 and 2 at Flying Horse Golf Course in Colorado Springs.

Hoover led all Niwot golfers on the day with an 80 (+8), which put him in a four-way tie for eighth place overall. He started strong, with two birdies and three pars on the front nine, and was just +2 at the turn. Down the stretch, however, he missed some crucial shots, and carded more bogeys than pars on the back nine.

“Honestly, I feel like I didn’t play well, but I played good enough,” Hoover said. “I didn’t need to go out and shoot low, but I shot what I needed to. I would have liked to play better, post something lower and contend, but it is what it is, and I got in, which was the main goal.”

The regional capped off a stellar regular season for the senior, who clinched individual titles at three tournaments this season and led the Cougars to the Northern Conference title. He will be making his third straight trip to the Class 4A state tournament, and is hoping to make the most of his final high school rounds.

“I’ve been hitting the ball well off the tee. I’d like to continue to fine tune that, and get my my irons where I’d like them,” he said. “I wasn’t as confident on them in the latter part of the round. It didn’t feel like I had quite as much control as I need to if I’m going to play well at state.”

Elliott came in one stroke behind Hoover with an 81 (+9), which was good for twelfth overall in the final standings. He is also a three-time state qualifier, though he was not able to play in the tournament last year.

Like Hoover, Elliott’s struggles with inconsistency were particular striking over the back nine, where four pars and two birdies were undone by a triple bogey on the par-3 11th hole and a double bogey on the 15th. However, Weaver was pleased at how well the senior was able to adjust for the variable weather conditions.

“I thought I played well, but I had a couple of errant shots today,” he said. “In the end, I qualified, so I’m pretty excited about that and pretty proud. I have a really good teammate coming with me to state, so I think both of us are pumped up knowing that we’re seniors and that we’re going to be playing at a really great golf course, and I think it’s going to be a really fun time.”

While Hoover is also looking forward to state, he won’t be headed there with his younger brother Sam, who missed the qualifying cut, thanks to those last few troublesome holes.

The junior ended up in a three-way playoff for two alternate berths, but a bad tee shot on the first extra hole doomed his chances.

Niwot’s fourth golfer, freshman Christopher Gunlickson was +14 for the round, and placed in a three-way tie for 25th place, and well over the qualifying mark.

Niwot closed out the boys golf season with a junior varsity tournament at Twin Peaks on Sept. 25. 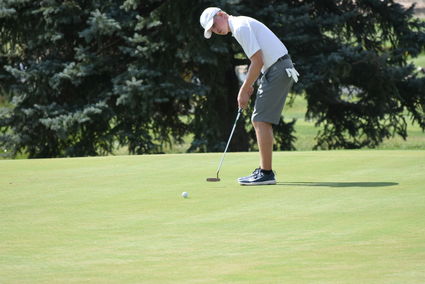 Senior Andrew Elliott putts during the Class 4A Region 3 tournament at the Olde Course on Sept. 19. Hoover finished in a four-way tie for eighth place, and qualified for state for the third consecutive year.