Student-Athletes of the Week: Hailie Johnson and the football team managers 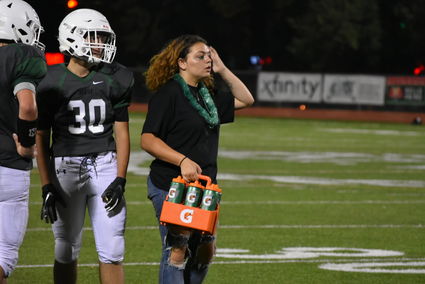 Senior Hailie Johnson Brings water for the Niwot football team during a time-out.

The football team managers may be highly visible during games as they sprint to and from the sideline with water, but the majority of their work is invisible to most fans. Uniforms, gear and game balls don’t just load themselves onto the bus, after all. For Niwot senior Hailie Johnson, however, being a team manager isn’t just about logistics. It’s about focusing on the details, so the players and coaches can focus on football.

“A lot of people think that we just get water for the guys, but there’s a lot more to it,” she said of her role, which also extends to daily practices. “We make sure the team runs smoothly from behind the scenes.”

Johnson typically oversees a group of three to eight managers, who travel with the team to both home and away games, where they help wrangle equipment and keep the sidelines orderly, in addition to the aforementioned water runs. During the week, Johnson and another manager are again on hand with water for the players, when they’re not hanging jerseys or cleaning the equipment room.

Johnson is now in her fourth year with the Cougars, making her one of its longest-serving team members, coaches included. New to Niwot, she joined the managers as a freshman, hoping to parlay her love of football into a brand new social circle. Three seasons later, it has fallen to Johnson to be the de facto leader, though the group doesn’t have a formal hierarchy.

“She leads and does everything she can to make sure things go smoothly,” Niwot Head Coach Jeremy Lanter said. “I don’t really have to dictate a lot to those girls, because Hailie will step in and take control.”

“Football is a huge thing in my family, and we always watch when the Broncos are playing,” second-year manager Grimaldo said. “I really love it and wanted to get more involved.”

Altenborg, meanwhile, is one of several newcomers this season, which has made for some hectic nights for Johnson as her managers get on-the-job training.

“The games can be stressful,” the ninth-grader said. “Sometimes, I don’t always know when the timeouts are, and I’m behind on it. But the best thing is the community. Everyone is just so supportive and it’s like a family.” 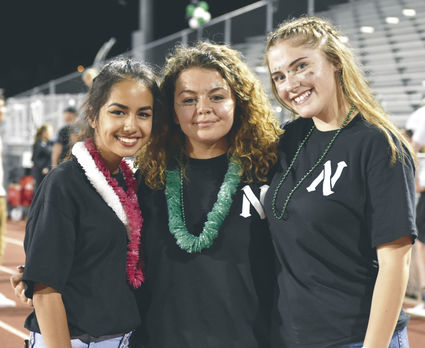 After watching the team struggle for so long, it has been particularly gratifying for Johnson to share in the Cougars’ burgeoning success on the field this year.

“It makes me really proud to be part of this team, because they just work so hard and care about what they do this year,” she said of two hard-fought victories. “I can tell they want to win.”

Johnson acknowledged that there have been some “emotional” times during her three prior seasons, including the death of David Louwers in 2016 and their winless season in 2017. However, thanks to the close camaraderie with both the team and her co-managers, she’s never considered quitting her “favorite thing in the world.”

“It brings me so much joy,” she said. “I think a big part of how you remember high school is what you get involved with. If you don’t get involved, you’re not going to have a great high school career.”