If a tree falls in Niwot…yes, we do hear (about) it 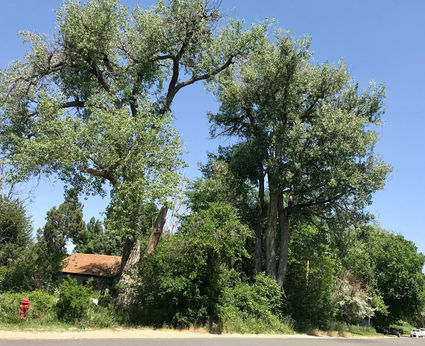 Cottonwood trees planted in the spring of 1895 on the Caywood Homestead no doubt inspired the eventual moniker for the property on Neva Road – The Shady Nook Ranch. The Jones family moved into the single room house that was encircled by the Cottonwoods in 1904 and dubbed it that sweet name. In 1970, the Theobald family bought the property and this is where Tom Theobald started the Niwot Honey Farm.

The house grew with a few small additions, but the trees grew even more and now safety concerns about the remaining two trees have led Theobald to make the difficult decision to remove the trees.

Cottonwoods are one of a few indigenous Colorado trees, Niwot historian Anne Dyni said. The high water table in Niwot suits their needs very well so they grow quickly and typically have a life span of 100 years.

By the time the Theobald family sunk their roots into the property, most of the Cottonwood trees on the lot had been removed. But, there are two remaining between the house and the road and they tower 75 to 100 feet over the house. Theobald has lived beneath them now for 48 years.

“I wish they could talk. They probably have hundreds and thousands of memories that they’ve overseen,” Theobald said. “But, they have to come out.”

So he arranged for a tree service to cut down the trees. It will take two days of work and “many thousands of dollars” to methodically remove what has grown for more than a century.

Fred Berkelhammer, owner of the tree service, said when Cottonwoods get this big, they are eventually unable to sustain themselves. They can become a public hazard too, especially if they hang over a road or a pedestrian area.

“These trees weigh tens of thousands of pounds. The owner will sleep better having them come down.” Berkelhammer said.

Last Tuesday, using a 70-ton crane, a machine operator lifted a harnessed “climber” over the massive tree and then lowered him into the canopy. Starting at the top of the tree, the climber attached a choker and a sling to a branch. He made a cut to the branch below the sling and signaled the crane operator, who then plucked the piece off the tree and lowered it to the ground.

The ground crew put the smaller circumference branches through a chipper. The resulting mulch will be given away to Boulder County gardeners. Bigger logs will go to firewood businesses.

Next week, the trunks will be sliced into portions and given to Boulder County to use for shoring up river beds.

“Taking down a tree this size is pretty exciting and incredibly dangerous. It’s not like a normal job,” Berkelhammer said.

Sue Wilson, whose house on 3rd Street is ringed by huge Cottonwood trees, said, “We have spent about $15,000 over the last 10 years or so having them trimmed in order to prevent a catastrophe. They are so beautiful I’m not willing to just cut them down unless the tree experts tell us it is necessary, which they have not thus far.”

Where the barn of the Shady Nook Ranch used to stand is now the Hedgpeth’s home on the corner of Neva Road and Dry Creek Road. David Ben Hedgpeth and his wife are living under the remaining three of the many trees that used to surround the barn.

“We’ve had problems with the trees. Limbs just fall into the street and everyone blames me for not trimming those trees. Well, they’re not on our property,” Hedgpeth said.

Just last week a four-foot branch, which Hedgpeth estimates weighs at least 200 pounds, fell into the street. A car passed by shortly afterward and when the driver saw the fallen branch, he had some sharp words for the Hedgpeths, assuming the trees belong to them. But the trees sit on a Boulder County easement, making the county the responsible party.

Several years ago, one of the trees fell on the Hedgpeth house, damaging the roof and their fence. The county paid for repairs, then removed the tree and another that sat beside it. The Hedgpeths preventatively removed one Cottonwood that was on their property because they felt it was just a matter of time before it fell too.

Recently, Hedgpeth was told by the county that the trees would get a “radical trimming,” but from what he can see, that has not been done and this concerns him.

“I have tried to get the county to do something. These trees have rotten limbs that are going to fall and hit somebody and they’re not going to do anything about it apparently until somebody gets hurt,” Hedgpeth said.

And yet another tree story made the news last July when a wind burst caused a four-foot diameter Cottonwood to fall across 83rd Street, striking a car. Fortunately, no one was injured in the incident.

Given the advanced age of many of Niwot’s Cottonwoods, there are bound to be more stories about these majestic trees as they decline.

When asked about his decision to remove the trees, Theobald said, “They’re beautiful trees, I feel horrible. I’m a romantic to begin with. This has all became part of my family and my history, but I don’t want to be crushed.” 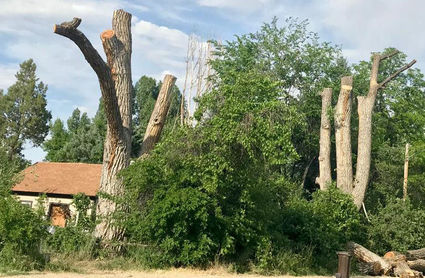 Only the trunks of the trees remain and will be removed later.