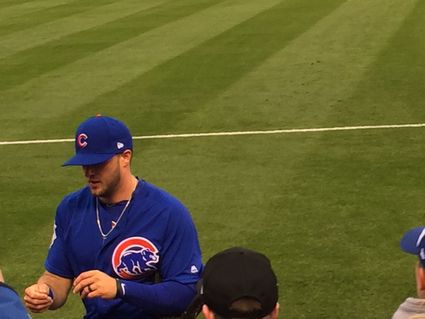 David Bote drove the second pitch he saw to the wall in right-center for the Chicago Cubs Saturday night at Coors Field, marking his major league debut with a double.

Bote is the son of long-time Niwot High School baseball coach Bob Bote, and the younger Bote pointed with both arms to his parents and the 32 family members and friends seated on the third-base side of Coors Field. The moment was not lost on the Colorado Rockies’ television crew, who interviewed Bob and Therese Bote during a break in the action.

Asked what it was like, Therese responded, “A dream.” Bob noted that David called the night before at 11:30 p.m., and Therese took the call.

“She came in and woke me up and said, ‘Hey, David’s on the phone,’” Bob said. “So I knew what it was, ‘cause he had always teased me about, you know, ‘Dad, would your phone be on when I get called up,’ and so it wasn’t of course … but it was surreal ... It’s just the coolest thing ever for us.”

Bob Bote coached baseball at Niwot High from 1979 through the 2006 season, winning five state championships. As a youth David spent many days at the high school field with his father.

After leaving his Niwot coaching position, Bob Bote continued to teach at NHS, then spent one year coaching at Erie High School before becoming an assistant at Faith Christian. David began his high school career at Erie, then transferred to Faith Christian, where his older brother Danny Bote, a Class of 2000 NHS grad, was the head coach for his senior year.

After graduation, David signed to play baseball at Liberty University where Danny had played for four years, but transferred at the end of his first semester to Neosho Junior College in Kansas. Neosho made it to the Junior College World Series in Grand Junction that year, and scouts who were following pitcher Matt Strahm, currently on the DL for the San Diego Padres, got a chance to see Bote play. The Cubs selected Bote in the 18th round, and he spent over six seasons in the minor leagues before being called up to the show.

In interviews, the younger Bote credited his wife Rachel and their two children for supporting him, noting that he almost quit when he was assigned to Class A Myrtle Beach to start the 2016 season. But Bote began to be noticed after hitting .337 for Myrtle Beach, which would have given him the league batting title had it not been for mid-season promotions to AA and AAA to fill in for injured players.

Bote spent the entire year at AA Tennessee in 2017, and led the team in hitting with a .272 average in a pitcher’s league. That earned him a trip to the Arizona Fall League, where he won all-star honors, and eventually a promotion to the Cubs’ 40-man roster.

Although he played well in spring training, Bote started the season on the Iowa Cubs AAA roster, and got the call when the Cubs placed former All-Star Ben Zobrist on the disabled list with a bad back.

Bote has played every position except catcher in his minor league career, and Cubs’ manager Joe Maddon likes his versatility. In a pregame interview, Maddon noted that he did not know Bote was from Colorado until Bote arrived from Iowa. Maddon, who played for the Boulder Collegians in the 1970s, mentioned Thornton, Boulder and Louisville, reminiscing about Colacci’s Restaurant.

Bote started at third base in his debut, with former MVP Kris Bryant moving to right field. He was out attempting to steal third after his double. Bote had one easy ground ball at third, then made two very difficult plays going to his left flawlessly. At the plate Bote struck out twice after his double, giving him a .333 batting average after his first MLB game, which the Cubs lost, 5-2.

The following day Bote was not in the starting lineup, but came on in the first inning after Bryant was hit in the head by a pitch and had to leave the game. Bote eventually scored that inning and went 0-2 at the plate before leaving for pinch-hitter Ian Happ later in the game, a 9-7 Cubs win.