Student-Athlete of the Week: Rosie Setter 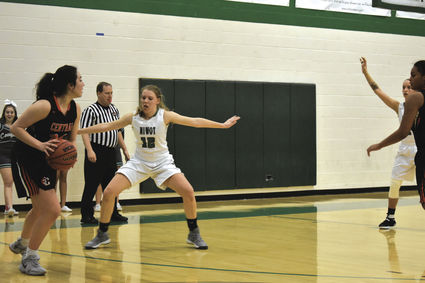 Niwot senior Rosie Setter may not be the highest scoring player on the girls basketball team, but it would be impossible to tell the story of the team’s recent success without her. After sitting out most of her junior season after suffering a torn ACL, the power forward returned to the court for Niwot in November on a mission: make up for lost time.

“I hate the saying, ‘You never know how much you love something until you let it go’, but it’s so incredibly true,” Setter said. “I realized how passionate I was about basketball, and it gave me motivation to play that I never had before. When I was forced to sit on the bench due to physical inabilities, it just hurt so much.”

Setter’s love for basketball developed early on. An unusually athletic first-grader, she tried several sports — volleyball, soccer, softball — before discovering a natural affinity for hoops. Now in her fourth year on the varsity squad at Niwot, Setter has been invaluable on both sides of the ball so far this season. Her 5.4 points per game is third highest on the squad, behind Mary Gillett and Sophie Grant. She also has the third-best rebounding average (4.7), and leads the team in assists. For Niwot head coach Terri Ward, however, Setter’s most important contribution to the team doesn’t show up in the stat lines.

“She’s our rock, especially on the defensive side,” Ward said. “She keeps us centered and calm when we get rattled. She sees what’s happening and is able to talk to her teammates and tell them what’s happening. She does a very good job of putting us in position and telling us what we need to do.”

Setter isn’t just a force on the hardwood for the Cougars. A top performer in Niwot’s rigourous IB program, she is also a serious student who plans to study electrical engineering at either CU-Boulder or the Colorado School of Mines after graduation. She is also active in Niwot’s National Honor Society, and is considering joining the golf team later this spring.

Setter acknowledged that her workload can be difficult to manage at times, but having five other IB students on the basketball team has created a natural study group. She also tries to take advantage of downtime during the school day to stay on top of her course-work.

“It’s hard, but I’ve thoroughly enjoyed the experience,” Setter said. “I’ve built my time management to such a level that I never would have been able to otherwise. Once I get home after basketball, the motivation to do homework is incredibly slim, so taking off-blocks in the middle of the day is a great help, for sure.”

Setter is undecided about whether she will pursue basketball in college, but knows she will hate to leave it — and the Cougars — behind.

“I’ve been playing with these girls for three-plus years, and the chemistry is so real, and it’s just such a family,” Setter said. “It’s a completely different experience to be playing with your family and not just a team, and I think that’s what Niwot does best.”