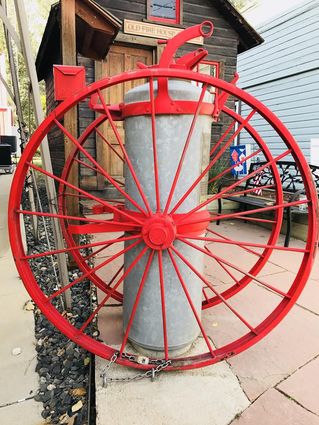 Courtesy Photo The 1910 galvanized steel fire cart is part of the Niwot Historical Society’s display downtown. The cart was recently named a top ten artifact in the state.

The Niwot Historical Society received some good news - the 1910 fire cart was accepted in the Colorado Collections Connections’ top 10 significant artifacts list for 2017.

The contest has been going on for five years, and Niwot has gotten enough votes from the public to be included on the list for the last two years — with the branded blacksmith doors making it in 2016.

Niwot Historical Society president Kathy Koehler said that the cart is significant due to its construction and the time period that it came to Niwot.

“By 1910, almost a decade after the commercial section of Niwot moved to the east side of the railroad tracks, concerns about fire protection prompted the citizens to acquire a chemical hand cart and build an 8 foot by 14 foot frame shed to house the fire cart,” Koehler said. “The fire cart is a symbol of Niwot heritage and development. It is located in the Niwot Historic District … It reflects the early 1900s settlement and growth in Colorado communities and their independence for protecting their building developments from fires.”

In the 1920s the shed was moved to the backyard of the Livingston Hotel on 2nd Avenue where it was remodeled into a wash house. The chemical cart remained beside the hotel for years.

When the Mountain View Fire Protection District - Niwot Station was built at the corner of Niwot Road and Longview Drive in 1983, the fire cart was soon resurrected and mounted for a display overlooking that intersection.

In January 2006, the Niwot Historical Society contacted the district fire chief about returning the chemical fire cart to Old Town Niwot where it could once again be displayed beside the fire house shed. The MVFPD agreed and in June 2006 the transfer was made. By this time the shed itself had been relocated by the Niwot Historical Society to a site on the west side of the historic Left Hand Grange No.9 Hall.

The Niwot Fire Cart was dedicated in its current location at the entrance of the fire house shed on July 4, 2006. The cart itself is made of galvanized steel with cast-iron yokes clamped around the top and middle of the tank, each measuring 50 inches in diameter. It was a factory floor model, not intended to be used outdoors and designed to be pulled by hand, not by draft animals.

The front panel on the tank reads that it is a “Buffalo No.21 Soda and Acid Chemical Fire Engine” made in Buffalo, NY, USA. Instructions to charge the mixture and maintenance are stamped on a 13” by 11” brass plaque.

“I think it is an honor for the Niwot Historical Society to be in the statewide contest and whenever Niwot can be recognized alongside the large metropolitan museums is impressive,” Koehler said. “We do not have the inventory or resources of the large city museums, but we have a hidden gem in the FireHouse Museum and we are working to expand and enhance the exhibits in the future.”