Student-Athlete of the Week: Lilliana Martin 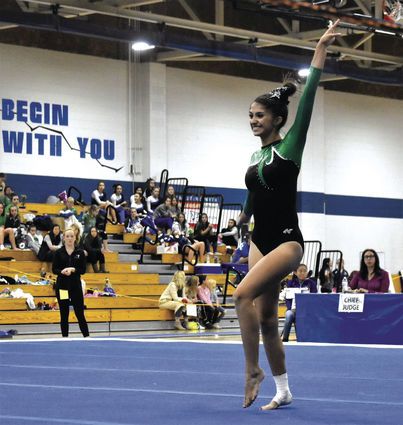 Martin capped off her high-school gymnastics career last weekend with her fourth appearance at the Class 4A state meet where she placed ninth in the All-Around competition, and helped lead her team to second place overall. In the individual events, the senior placed fifth overall in the floor event, and sixth in vault and bars.

Her final appearance at state was all the sweeter because it almost didn’t happen. Early in the season, Martin injured her ankle during practice, and wasn’t cleared to compete in all events until October, more than halfway through her final season. Though frustrating, Martin said the layoff was ultimately a blessing in disguise.

“It was good for me as a senior and a captain to have to be on the sidelines and cheer my teammates on from the different aspect of not competing,” she said. “Being back, I feel like I’m a stronger gymnast.”

Though gymnastics has been an integral part of her life for years, Martin said she has no plans to pursue a collegiate career. Instead she hopes to further her track and field ambitions while earning a degree in nursing. An excellent student at Frederick High, Martin is also a sprinter there, and her 4x400 team took 13th last year at the state Class 4A track meet.

Martin said there are some things she’ll miss more than others about competitive gymnastics. “I’m going to miss the sport and my teammates so much, but at the end of it, your body hurts all the time. It’ll be good to give my body a rest, but I’m really sad to leave the team aspect of it.”

“My mom’s coached me since I was little, and we’re a good team,” Martin said. “To think that we’re not going to be together every day next year is really sad. I’m going to miss it, because she’s awesome.”