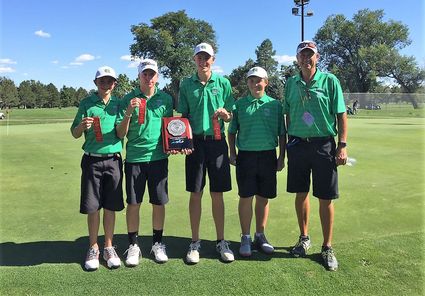 If Niwot golfer Jack Hoover was intimidated by the prospect of playing with defending state champion Luke Trujillo at the Class 4A Region 1 tournament at Elmwood Golf Course in Pueblo, he didn’t show it beforehand. In fact, his reaction was exactly the opposite, according to Niwot head golf coach Ed Weaver.

“He was totally excited about it,” Weaver said of the junior, who took first or second in four of Niwot’s ten regular season events this year. Trujillo, who was -4 over 2 rounds at the 2016 tournament at Carbondale, won the state title after besting Silver Creek’s Jackson Solem in a two-hole playoff and led Discovery Canyon to a 15-stroke team win.

Weaver said this mentality says a lot about his number-one golfer’s confidence level going into the post-season. “Jack’s attitude is so good…and he can back it up. He’s playing really well right now.”

Well enough, in fact, to lead the Cougars to their second straight state tournament berth.

Hoover had 14 pars and a birdie to come in at 73 (+3) on the day, which was good for second place overall. His junior counterpart Andrew Elliott carded a 78 (+8) to take fifth, while sophomore Sam Hoover (+22) tied for 25th, and freshman Luc Blondeau (+41) was 48th. Niwot finished second in team scoring, 22 strokes behind first place Discovery Canyon (221), making the Cougars eligible to take a three-man team to the Class 4A state meet at Raccoon Creek in Littleton.

“I was pretty surprised,” admitted Weaver, whose pre-tournament projection had the Cougars finishing well out of contention. “I took all the teams and all the averages and we should have finished fourth. I guess those guys didn’t perform to their averages.”

Weaver didn’t speculate about his team’s chances next week, but said he plans to keep the team “loose” and stick with what’s been working. Sam Hoover will have a chance to get one more competitive event in this week at the Northern League junior varsity tournament, which Weaver is hosting at Twin Peaks on Sep. 26. More than 100 players from nearly 30 teams are slated to participate. Weaver also has a practice round at Raccoon Creek scheduled for the team next Sunday, ahead of the tournament’s opening on Monday, Oct. 2.

“There’s not a whole lot I want to change with these guys,” said the coach, who added that his team is more excited than surprised by their state tournament bid. “Next week is going to be all about working on some chipping and putting, the fundamentals. I’m not really going to be doing much of anything different.”

Hoover is slated to tee off in the first round at 9:06 am on the 10th hole, and is tentatively paired with league foe Darren Edwards of Thompson Valley and T.J. Shehee of Mead. Elliott will tee off at 8:57 on the 10th, and is also grouped with players from Thompson Valley and Mead. Sam Hoover, with an 8:48 tee time, will face Thompson Valley’s Chase Corlett and Mullen’s Rhett Johnson.