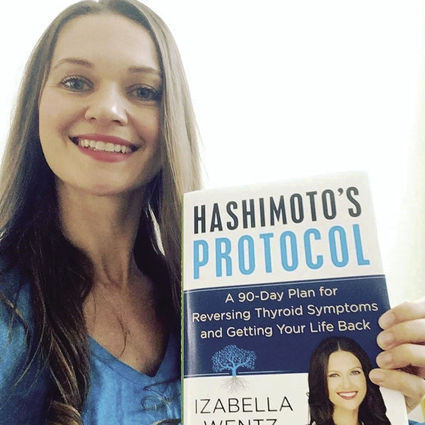 Along with the growing stressors of modern life, there’s been a corresponding dependence on fatigue fighters such as energy drinks, triple-shot lattes and Mountain Dew. We take supplements to re-charge our metabolic systems, often reaching for quick-fix solutions when what we really need is to rest and recharge. But then, who’s got the time?

But without time spent each day in an anabolic state, or what Niwot author and pharmacist Dr. Izabella Wentz calls a state of “rest and digest,” we’re basically telling our bodies that we’re unsafe—a situation that, over a sustained period, triggers biologic responses that can lead to autoimmune conditions.

At 27, Wentz was diagnosed with Hashimoto’s disease, also known as hypothyroidism, an autoimmune condition that results in an underactive thyroid gland. Wentz often felt cold, with other symptoms including hair loss, acid reflux, fatigue and depression. Like many autoimmune sufferers, she was told by doctors that her symptoms were just in her head.

One doctor told her she was experiencing “the normal signs of aging,” she said. That was her wake-up call. From then on Wentz took a more active role in figuring out her own road back to health.

That plan led to remission, and her recovery eventually led to the publication of her latest New York Times bestseller, Hashimoto’s Protocol: a 90-day plan for reversing thyroid symptoms and getting your life back, which released on March 28, 2017.

The condition runs in Wentz’s family, and she attributes her mother as the force behind the book, urging her to write so that “my cousins in Poland would start feeling better too,” she said.

The thyroid is a small, butterfly-shaped gland that produces hormones such as thyroxine (T4) and triiodothyronine (T3), which stimulate vital processes throughout the body. Not coincidentally, thyroid hormones impact the proper functioning of the body’s heat production, its ability to make use of vitamins, proteins, carbohydrates and fats, along with fertility and growth. In hypothyroidism, the body’s immune system attacks its own cells, and if not caught in its early stages, the gland can become permanently damaged.

Hormone replacement therapy is the first step on the road to recovery, but because Hashimoto’s is so complex, Wentz recommends several dietary and lifestyle changes as well.

Gluten seems to be a major trigger for producing an autoimmune response. Cardiologist and author, Dr. William Davis, argues in his 2011 book, “Wheat Belly: Lose the Wheat, Lose the Weight,” that genetically altered “Frankenwheat” has been imposed on the public by agricultural geneticists and agribusinesses to disastrous results for the collective gut.

But whatever the cause of the population’s prevalent wheat sensitivities, Wentz’s protocol encourages a 90-day abstinence from flare-up triggers such as wheat, alcohol and caffeine, and recommends that anyone diagnosed with Hashimoto’s to remain gluten-free indefinitely.

An estimated 20 million Americans suffer from some form of thyroid disease, according to the American Thyroid Association. And though there’s a disproportionate number of women hit with thyroid conditions, there’s no known reason why. But Wentz offers some theories, which include exposure to toxins in personal care products, along with pregnancy, genetics and culture.

“Women often put themselves last,” she said. “There’s a stigma attached to women who demand attention or have ‘too many’ needs—they’re considered ‘high maintenance’.”

In addition, “[Women] jump from one activity to the next, from school to work, to children’s sports, to homework to dinner. We’re rushed in the mornings, we eat in the car…our time is overly scheduled.”

For every one man, she said, “five to eight women are diagnosed with a thyroid condition.”

Hashimoto’s triggers also include nutrient depletions, food sensitivities and intestinal permeability (also known as “leaky gut”), among others. So it makes sense that treatment includes changes in eating and other lifestyle behaviors.

Taking probiotics helps to balance gut flora, and the removal of triggering foods from the diet can make huge changes in an autoimmune sufferer’s sense of well-being. But the biggest impact, for Wentz, happened when she started taking a thiamine supplement—simple vitamin B1.

“You’ll know in five days if it’s going to help,” she said. It helped resolve her fatigue issues. Another easy solution with a huge payoff came over-the-counter as well: digestive enzymes. Other recommendations include “gut-healing nutrients, such as Omega-3s, zinc, L-glutamine and bone broth.”

Stress causes the adrenal glands to pump out extra hormones, shifting the body from a relaxing, digesting and healing state, to a fight-or-flight response state. To promote the “rest-and-digest” state, Wentz suggests introducing more self-care activities. Sipping hot lemon water in the mornings for its “liver-supporting properties” while enjoying a warm water foot soak will give the metabolism a boost.

“You can add lavender or other essential oils to the water, [and] set your intentions for the day,” she said.

She also recommends spending an hour every day reading inspirational or spiritual books, “Whatever you find uplifting,” she said. Journaling can also be helpful. “You can make a list of your health goals and journal about it. Then check in with yourself.”

She also suggests celebrating small successes. Maybe your hair has stopped falling out (though maybe it hasn’t grown back yet), “but still—it’s progress,” she said. “Listen to your body,” she continued. “If you’re tired, take a nap. If you’re taking a lot of Maalox, eat less acid-forming foods, such as fresh vegetables, and avoid sugar, caffeine and alcohol. You can do anything for 90 days.” The results may just be worth it.

Wentz has a Facebook community where people with Hashimoto’s write in with questions ranging from how to combat a vitamin B12 deficiency (she recommends sublingual tablets), to whether or not sufferers should stop dyeing their hair (yes). Visit her at Facebook.com/thyroidlifestyle. Hashimoto’s Protocol, and Wentz’s first book, Hashimoto’s Thyroiditis, are available at most major book retailers.