Courtesy Photo Healer Don Mariano and the offering from the despacho ceremony.

Peruvian shamanic healer Don Mariano will be paying a visit to Boulder County next month with a week’s worth of visits and other events.

Christine Pateros of Whispering Stones in Boulder will be helping to facilitate the trip along with the ceremonies.

“In essence the despacho ceremony is honoring Mother Earth,” Pateros said. “It’s about nature, which is what we’re made of. It’s creating a mandala from earth pieces like flowers and leaves, seeds, spices, things like that. It’s a living prayer ceremony.”

“The great thing about the despacho ceremony is that it’s a community event. Don Mariano is all about community. He says he doesn’t come all this way to just see a few people -- they want to connect with as many people as they can.”

Everyone participates in the ceremony and gives something like flowers or leaves or anything from nature.

At the end the shaman wraps it all up as an offering and connects with each person individually before giving the bundle to Mother Earth in fire or in water.

“It’s really about saying ‘thank you’ to Mother Earth and being ayni — it’s the Andean way — there is no equivalent word for us in western culture. The closest is reciprocity -- you give before you take -- it’s a balance. They don’t know any other way and it’s difficult for them to explain it. It’s just how they live.”

Mariano is a shaman of the Q’ero who lives in the highlands of the Peruvian Andes mountains.

“When you go to Peru and see the colorful garments, that is the Q’ero people,” Pateros said. “Don Mariano is an elder and a shaman from his community. But literally he travels around the world because people know he’s connected to earth. He’s very wise and gentle and has a great sense of humor. He’s a joy to be around and learn from.”

Pateros has visited him several times in his homeland, and Mariano was most recently in the states last April. After a week in Boulder County, the group will head to Chicago for another round of visits.

“It’s a pretty big deal,” Pateros said. “People actually come from all over the country to train with him, learn from him, have ceremonies and healing from him.”

The healing is a holistic approach, focusing on the entire body with the belief that connecting to nature makes one whole.

“It’s healing on all levels — nothing is left out,” Pateros said. “The shaman sees any living being as a ‘whole’ being. For example, anything from physical to mental ailments — no matter what people come with — you see them as a whole, not as ill or broken. That is how the shaman sees.

“We also know that we, as humans, crave soul connections and connections to ourselves. We may not realize it, but it is there.”

Pateros said that these events and beliefs are not religious in any sense of the word as understood in Western culture, rather, it is a way of living.

“It’s a way of being that’s connected to the earth, our home,” Pateros said. “And to all that is in spirit. The shaman connects between them all. In the most pure sense they are the medicine person in a village.”

Mariano will also be hosting workshops in Longmont on Saturday and Sunday based on connecting with the stars, called a “Kanchis Q’oto.” 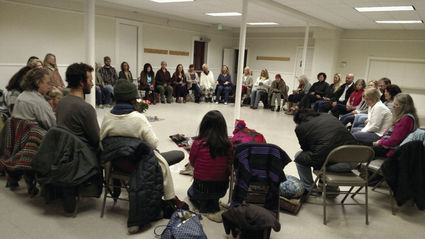 Courtesy photo A despacho ceremony at the Left Hand Grange Hall in Niwot last April. Another event is set for July 14 with Peruvian shamanic healer Don Mariano. The healer will make various visits around the county.

“What that means essentially is that he creates a space for each person to be connected to the stars,” Pateros said. “That’s considered being also connected to a person’s ancestors and their destiny.

“Because we have choices, this supports us to be able to make choices that allow us to lead the most joyful and fulfilling lives.”

For more information on the events in Niwot and Longmont, visit http://www.whispering-stones.com/events.