Student-Athlete of the Week: Skyler Messinger 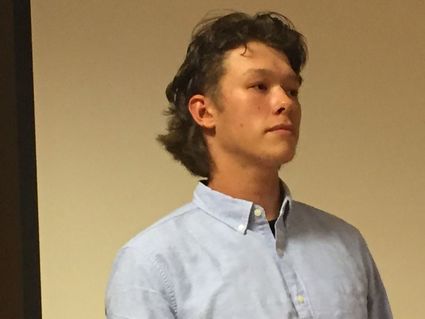 Skyler Messenger, known simply as “Skye” to his friends, is the Student-Athlete of the Week. Messinger concluded a stellar high school baseball career by being named the Northern Conference position Player of the Year this season. Messinger led the team and the conference in most offensive categories, and played outstanding defense at shortstop. He was also named Second Team Class 4A All-State by CHSAA, even though Niwot missed the playoffs. As a freshman, Messinger played in the state championship game for Niwot, and as a junior, he homered in the Futures Game at Coors Field with a wood bat.

His exploits on the ballfield as well as his classroom performance earned him a scholarship to play baseball next season at the University of Kansas. He maintained a 3.4 GPA at Niwot, and is considering pursuing a degree in sports psychology. “I had done a session with a sports psychologist a year ago, and it was super interesting,” Messinger said. “I definitely saw effects immediately from it. I did it before a tournament, and I had one of the best tournaments ever. I had a lot of confidence and I was just on fire for the whole weekend.”

Messinger’s older brother, Connor Messinger, has been a source of inspiration to Skye. Connor played varsity baseball for four years at Niwot, then completed a collegiate baseball career at Nebraska-Kearney last year before joining the NHS coaching staff for Skye’s senior season. “My brother has had a gigantic influence,” Skye said of his interest in baseball. “I think I knew from a young age, fifth or sixth grade. That’s when I started to get dedicated to it.”

This summer, Messinger is one of only two graduating seniors to play for the Boulder Collegians, an elite program of summer baseball for college players. “It’s a fun group of guys and I’m seeing good pitching and good competition,” Messinger said. Major league baseball scouts have kept an eye on him all season, and with the draft approaching, it’s possible the he will have to choose between signing a pro contract and playing for Kansas.