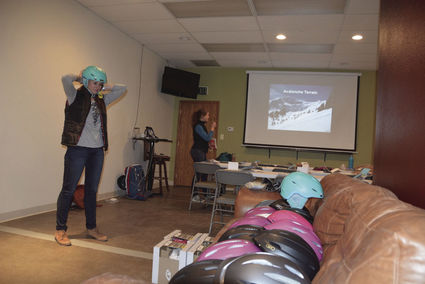 Courtesy Photo Avalanche training is one of the many services offerred by Colorado Wilderness Rides and Guides. They also do leadership and team-building exercises for corporations and other clients.

Colorado Wilderness Rides and Guides recently moved their headquarters to Gunbarrel with hopes to continue expanding the business.Joshua Baruch, CEO, general manager and jack-of-all-trades for the company said that they’re gearing up for the busy season, May to October.

“That’s typical with tourism in Colorado,” Baruch said. “It’s really more due to the weather and the environment being nicer to where you can get more access to the mountains and rivers.”

The company re-branded last year and continues to provide a variety of services, but its main focus is rides and guides through the mountains, with an education component.

“We do pretty much every type of guided tour,” Baruch said. “We have about 15 different land managers, we’re also a licensed outfitter for fishing in Colorado, and we are a licensed rafting outfitter.

Baruch, who has a background in education, said that teaching people about the outdoors is incorporated in all of the experiences they offer. “Our goal is to connect people to the outdoors through education, adventure and life-changing experiences,” Baruch said. “We also have a corporate education, so we utilize outdoor experiences as an educational platform to advance leadership skills.”

They recently had a 100-person group do a leadership exercise in Boulder Canyon, the corporate events are some of their biggest requests. But they’re still looking to expand.

“We’ll start some presentations coming up in a few months,” Baruch said. “We’ll eventually do a bit of retail out of here in terms of small stuff like fly fishing rods and other products.”

Most start at the headquarters in Gunbarrel, but the company still spreads its wings in the county. “The only part of our company that isn’t based out of Gunbarrel is our river department,” Baruch said. “Everything else is based out of here. We’re also looking to make this an adventure hub for the local community.”

Baruch said that the one constant from clients is a need to touch base with nature. “One of the components is a sense of adventure, people come to enrich their lives,” Baruch said. “They also come to reconnect with people they’re with.

“In the mountains, there are those areas where you don’t have any reception, so there’s no technology. That’s a big thing when you’re reconnecting with yourself and those around you. I think also that the idea of wilderness is big.

“As Americans, we have this idea of ‘Manifest Destiny,’ which as we developed as a country, going west into these wide-open spaces — it’s in our genetics almost. That’s what Colorado and the mountains does to us.”

Getting out also gives some exercise. Baruch said that beyond the cardiovascular benefits, studies have shown that sleep patterns and hormone levels improve through simply being outdoors.

He also said that a study is being done at Berkeley (CA) that is monitoring the mental effects of being outdoors on veterans. The goal with that study is to see the benefits on PTSD treatment by spending time out in nature.

“You see the people that go out and come back are recharged,” Baruch said. “Even one day outside, you sort of find it. The longer you spend out there the better you feel.

“I think we’re inundated with information. It takes longer to digest all of that information now because there’s just so much more these days. It’s important to take some time for ourselves.”

Beyond the personal benefits, Baruch said that the tourism industry is both benefitting from the growing economy and contributing to it.

“People are definitely spending money on getting outdoors,” Baruch said. “It’s about adventures and experiences. We want to connect people to the outdoors and each other, hopefully improve their lives and be a spark for a desire for these experiences. It will help them personally and us as a community exponentially.”