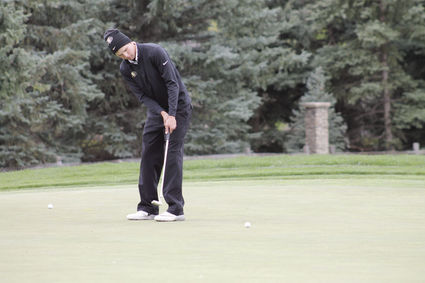 Courtesy Photo//Boulder Country Club University of Colorado golfers had home course advantage for the PAC 12 men’s tournament last weekend at the Boulder Country Club. The event was cut down to three rounds due to the snow, but CU golfers still had a good showing.

This year’s PAC-12 men’s golf conference championship was held at Boulder Country Club over the weekend.

Rain and then about four inches of snow held up Saturday’s rounds, and leftover snow on Sunday morning made for even more delays.

But the golfers were able to play 54 holes, meeting the criteria of 36 for an NCAA-sanctioned event.

Bob Webster — who belongs to the club and serves on the board of directors, along with acting as governor of the Colorado Golf Association — said that hosting the event was great for the community.

“We think it’s an exciting opportunity for the membership and the general Boulder community to be able to experience golf at its highest level,” Webster said. “Ten of the best 12 amateurs in the country are in this field.

“Outside of the PGA tour, this is as high of caliber of golf as you can see anywhere. I think people maybe don’t realize what a big deal this was.”

Webster is a University of Colorado alum and supporter, so he was excited to see Ethan Freeman, who attended Kent Denver High School, compete in the number one spot for the Buffalos.

Colorado finished seventh overall as a team with a 1095 total for all six golfers. Freeman and Spencer Painton both tied for 20th with a 218 in their three rounds.

Kate Kippenberger, communications and membership director for the club, agreed with Webster that hosting was a great opportunity.

“We have a great relationship with the university and their athletic department,” Kippenberger said. “They approached us last year to see if we’d be interested in being the host site. We were more than honored to be the host.”

The conference rotates which school will host the championships, which means the event won’t be back in the state for 12 years. The first time Boulder Country Club hosted was the women’s championships in 2015.

“It was through that event that the university was interested in speaking to us again about being the site,” Kippenberger said. “It’s just really an honor for us. We love the fact that our school — right here in Boulder — approached us about it.

“Our membership was very willing to give up their club and their course for these four days and host the public to watch the event.”

The tournament was open to the public, and attendance was good considering the weather.

“It’s been a wonderful opportunity for the members,” Webster said. “And for the Boulder community, to see golf at its highest level.

“The membership and club leadership realized the opportunity, and we all realized it was in the best interest of the club. It’s great to watch these high quality players. We were happy that they asked us to host.”