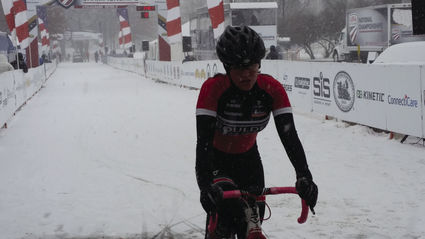 Rosemary Morrissey is looking forward to getting back on her mountain bike this summer to get back in training for cyclo-cross competition. Morrissey, a sophomore at Niwot High School, finished seventh at USA Cycling Nationals in Hartford, CN, January 8th in the Women’s Junior 15-16 division, after winning the Colorado state title.

Cyclo-cross combines cross-country running with biking, Morrissey explained, comparing it to a steeplechase. “The races usually last 40 minutes,” she said. “You have to go over obstacles.” The obstacles can be 100-feet long, such as going up the side of a hill that’s too steep to ride. “There are barriers such as wooden planks one and one-half feet tall, and stairs. You have to get off and carry your bike by putting your shoulder through the frame.”

“My dad raced cyclo-cross when he was my age in Connecticut,” Morrissey said. “He still competes.” She participates in Boulder Junior Cycling, which has a cyclo-cross program. “We had 150 kids, 21 at Nationals,” she said.

Competition begins again next August. Morrissey earned a sponsorship based on her performance last season. She will ride for Custom Luxe, a bicycle wheel company, which will provide three sets of carbon fiber wheels for her next summer. “I’ll write some blogs for them,” she said.