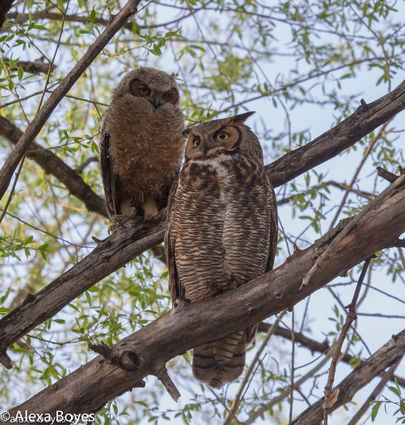 Great horned owls could be chalking up a victory from the Boulder County Planning Commission’s vote this month to not recommend an affordable housing project in the Twin Lakes area.

Prior to the decision, students from the Boulder Valley School District presented their short film, “Home of the Owls,” before the school board.

Anya Smith and Summer Cuppari Gould of Dream Tank showed their video to members of the board, whose district owns about 10 acres in the area where the housing project was proposed.

They filmed the owls and produced the video along with pleading their case to the board.

Ken Beitel, chair of wilderness conservation for the Twin Lakes Owl Preserve, said that they are happy with the decision and looking to move forward.

“We had a warm welcome from the Boulder Valley School District the day prior to this historic vote and board members expressed interest in touring the proposed Owl Preserve and Open Space,” Beitel said. “We appreciate their willingness to discuss the potential creation of a BVSD Owl Education Center.

“Open to the community and complete with nature trails, interpretive signs and guided hikes, the Owl Education Center could become one of the most loved elements of the BVSD school district as 10,000 students and teachers each year experience the magic of baby owls learning to fly and the life-cycle of these wild great horned owls.”

They started the project about a year ago to get the land directly south of Twin Lakes to become an owl preserve. They also worked alongside Twin Lakes Action Group - another advocacy organization that opposed the location of the housing project.

“We’re independently working towards a common goal,” Beitel said, “that being the preservation of this important ecosystem that is home to a lot of species to protect.”

He said that the goal has always been for open space and helping maintain wildlife habitat.

“We support the creation of the open space,” Beitel said. “Not only will it serve wildlife and conservation goals, but it will be wonderful for members of the community and all Boulder County residents. We see it being a wonderful place for both people and animals.”

Beitel, along with members of TLAG, believe that there are places in the county better-suited for medium or high density housing.

“The creation and protection of open space has always been a core value of Boulder County residents,” Beitel said. “We support affordable housing, but feel that there are more suitable locations for the project.”

Now that the plans for development have hit a bump, Beitel said they are going to work even harder to get the preserve in place.

“We are looking forward to working in partnership with the county and the school district to create the Twin Lakes Owl Preserve,” Beitel said. “It will be great for future generations to enjoy the area, a new open space where people can enjoy watching the owls and other wildlife.”

The video and more information can be found at http://www.boulderowlpreserve.org.