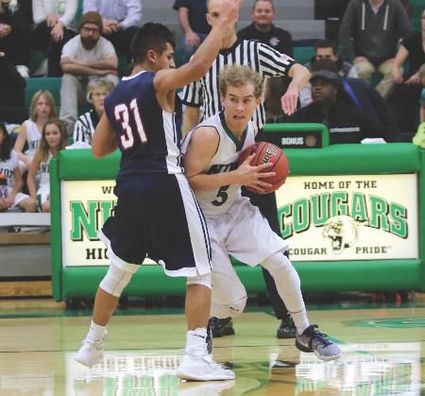 The Niwot boys wrapped up their regular season last week with a win against the last place Centaurus Warriors (4-17) followed by a loss to first place Northridge (19-3). The Cougars finished with an overall 10-13 mark, and went 6-8 in the Northern League. In the CHSAA’s final RPI standings, Niwot was ranked 36th, and will play 29th-ranked Elizabeth in an away game for the first round of the Class 4A playoffs.

For Niwot head coach Preston Hardy, the jury is still out on his team’s overall performance this season, even though they’re moving onto the postseason.

“It’s been up and down, that’s for sure,” Hardy said. “But a lot can be erased with a playoff win.”

Up and down is certainly a fair characterization of the Cougars’ final week. On Feb. 13, Niwot hosted the struggling Centaurus Warriors in a game that was closer than it should have been.

When these two teams met earlier this season, senior Jake Sims scored a season high 20 points to lead the Cougars to a 63-54 win. But if the Cougars were hoping for a repeat last Monday night, they didn’t get it.

Led by seniors Grayson Walker and Eric Gambon, a spirited Warriors squad nearly played the spoiler. Establishing a fast pace early on, the Warriors pushed Niwot on defense, and never allowed the Cougars to take control, despite a better than average offensive effort. Niwot took a two-point lead into the half (38-36), but struggled to stop Centaurus in the second half. When Centaurus tied the score at 64 with less than a minute to play, it took strong words from Coach Hardy during a timeout to finally bring the Cougars around. Niwot would hold on to win 69-64.

Five Cougars scored 10 points or more in the game, including senior Adam Barber, who had 20, and senior Carter Osteen, with 12. Junior Cameron Carlson led the team in rebounds, with eight, and also chipped in with 10 points. Shooting from the floor was 53% (26 of 49) on the night, up from 30% the prior week against Thompson Valley.

The Cougars played their final regular season game two nights later against Northridge, one of the top teams in the state. In their first meeting, Northridge beat the Cougars by 28, and in Hardy’s estimation, the Grizzlies have earned their top ranking.

“Northridge is undefeated in the Northern League,” said Hardy. “That makes them pretty battle-tested.”

The Cougars fared a little better this time, losing by just 21, but the contest was never in doubt. Niwot scored first, on a three-pointer by Sims in the game’s opening seconds, but a 90-second lead is all they would get. The Grizzlies had led by 20 at the half, and went on to win the game 75-54.

Sophomore Thomas Bounds paced the Cougars with 18 points on the night, including four of the team’s six three-pointers. Barber (10) and Sims (9) combined for 19, and Barber also grabbed nine boards. Osteen added another five points, while seniors Alex Helgeland (3) and Connor Ryan (2) also scored for the Cougars.

Prior to the game, Niwot honored the senior players who were going into their final regular-season game. For Sims, it’s hard to believe that his four years of basketball are coming to an end.

Despite ending the season on a down note, Hardy and the Cougars are ready to move on to the next level.

“I think we’re looking good,” said Sims of his team’s playoff chances. “We’re ready to compete, and I think we’re going to shock some people.”

Hardy agreed, noting the Cougars will be heading into the post-season pretty battle-tested themselves.

“There’s no substitute for experience,” he said. “We’ve got 23 games of experience under our belt, and I think these boys will be pretty dangerous in an elimination game.”