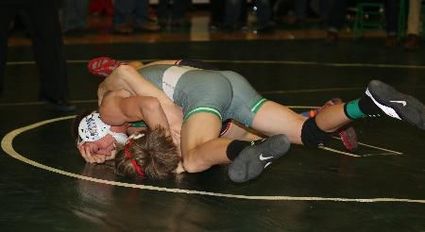 Tommy Stager continued his march through the Niwot record books at the Gary Daum Classic last Saturday, and claimed yet another pair of firsts on the way.

In front of his home crowd, Stager needed just 1 minute 38 seconds of the 145-pound championship match to pin Monarch senior Hunter Pape, becoming the first Cougar wrestler since 2013 to win at the meet honoring the legendary Niwot coach who passed away in 2012.

It was Stager’s first Gary Daum title, though he was a runner-up in 2014 and 2016. He was also named the tournament’s Most Outstanding Wrestler, another first for both Stager and Niwot.

Stager’s 30.0 points on the day lead the Cougars to an 11th-place finish overall. With the win, Stager improved to 17-2 on the season, and he remained No.1 in Tim Yount’s On the Mat Class 4A rankings in the 145-pound division. Matthews believes that Stager has earned that ranking, though he cautioned against looking too far ahead.

“There are a lot of tough matches left in this season,” said Matthews. “Erik Contreras is working very hard as well, and Tommy will see him three to four more times before it is said and done.” Contreras, a junior at Mountain View, is currently ranked second, and is responsible for one of Stager’s two losses this season.

Elsewhere for the Cougars, junior Alex Gazdik turned in a solid performance for the Cougars at the Classic, finishing fifth in the 132-pound class, and scoring 12.0 team points. Senior Dylan Bonge lost 10-4 to Dennon Parks of Highlands Ranch in the 3rd place match of the 138-pound bracket, but the fourth-place finish added 11 points to Niwot’s team total for the day, and improved Bonge’s season record to 5-8. Matthews was pleased with the return to form he saw from his veteran wrestlers.

“Dylan wrestled very well Saturday and is improving,” said the coach. “Alex has gotten off to a rough start this season but this week I saw him put things together and win some tough matches.”

Nathan Hemenway, a junior who added 35 pounds in the offseason, was also singled out by Matthews for his continued progress.

“We have changed his style this year and he is really starting to understand,” he said. “I’m proud of the way he is working and improving.”

The Gary Duam Classic capped a busy week for the Cougars, who faced Elizabeth in a head-to-head meet on Jan. 6. Niwot fell to the Cardinals 39-33, but individual results were not available at press time. The Jan. 5 dual against Northridge was postponed due to snow, and has been rescheduled for Jan. 11.

The Cougars will be back on the mat for a dual at Centaurus on Jan. 12, then will join 35 other teams for the Frederick Warrior Invite on Jan. 14 at Frederick High School.